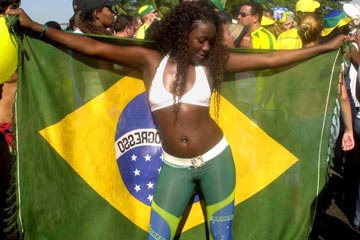 Nearly 200 million people call Brazil home, making it the fifth most populous nation in the world today [source: Nations Online]. Only a fraction of those are native to the country, however. Brazil was colonized in the 16th century by Portugal, and later welcomed large numbers of Germans, Italians, Spaniards and Poles. About 2 million African slaves were brought to the country over a 300-year period, as well [source: Capoeira]. Today, roughly 55 percent of Brazilians are white, with about 45 percent of black or mixed ancestry [source: Kwintessential].

Despite Brazil's immense physical size (it covers nearly half the continent of South America), most of the country's residents live within 200 miles of the Atlantic coast [sources: Every Culture, InfoPlease]. Its interior, home to the mighty Amazon River, is considered somewhat wild terrain. People of African descent are mostly clustered in the northeast, those of European and Japanese ancestry mainly reside in the south and southeast and the few indigenous residents live in the north and central-west [source: Brazil-Travel-Northeast].

Due to early Portuguese explorers, Brazilians today speak Portuguese and are largely Catholic, which means holidays like Christmas and Easter are important nationwide. Due to the country's heterogeneous population, racial divisions are far less common than divisions by social class. In fact, Brazilians are rather fixated on class distinctions. When two Brazilians meet, they quickly size up each other's appearance and speech to determine who is more educated and thus of a higher social class. The person who has the higher standing has more authority, and the other person must defer to him or her [source: Every Culture]

No matter your social class, Brazilians are very family-oriented. Women tend to stay home and take care of the kids (although the number of employed women is definitely rising), and if they work, their income is considered supplementary. Children live at home until they marry, and when they do move out, they live near their parents. Weekends are spent visiting with relatives. Despite such familial closeness, it's accepted that many Brazilian men operate under machismo, a concept brought over by the Portuguese colonizers. Machismo translates into a system where men are viewed as strong and powerful and must prove their virility through premarital and extramarital affairs. Women, in contrast, are considered weak and are expected to remain chaste until marriage and faithful after.

Brazilians love soccer (called futebol) and their wild, pre-Lenten celebration of Carnival (which we'll cover later in the article). That's partly because they're an exuberant people, enthralled not only with lively events like Carnival, but also in the bustle of city life; in the samba and bossa nova music they contribute to the world; in their propensity to touch and be personally expressive; and even in their relaxed attitude toward nudity [source: Every Culture].

The foods traditionally eaten by Brazilians are a product of the people's diverse ethnic backgrounds, as well as the land itself. At the heart of the Brazilian diet are rice, beans and manioc, a root vegetable from which they make farinha, a fine, yellowish flour. Meat, poultry and fish are added to the staple foods in varying degree.

It's not surprising, then, that the national dish is feijoada. The dish, whose name means big bean stew, is comprised of several meats that are slowly cooked with black beans and condiments. If you have a feijoada completa, or complete feijoada meal, the stew will be accompanied by fresh orange slices, rice, peppery onion sauce, chopped collard greens and farinha. Although feijoada's origins are as a slave meal, it's consumed by all Brazilians, is served at restaurants (typically on Wednesdays and Saturdays) and is commonly served when entertaining [source: Every Culture]. Since rice is a dietary staple, another popular dish is fried rice balls.

While the above food and drink are common throughout the country, there are regional differences as well. In the northeast, where there's a heavy African influence, palm oil, dried shrimp, peanuts and peppers are used in many dishes, and in southern Brazil where there are numerous cattle ranches, grilled meat and barbecues are popular.

Will You Marry Me?

Brazilians have many interesting wedding traditions. One dictates the bride must be at least 10 minutes late to her wedding to ensure she arrives after the groom, who simply can't see her beforehand. Another says the two must take care not to drop the wedding rings during the exchange, because if they do, it means the marriage won't last [source: Cape Cod Justice of the Peace].

Brazil is a true melting pot, and as such there's not one particular type of traditional clothing. In general, Brazilians wear clothing that's comfortable yet richly colored and sophisticated. However, there are some preferred clothing types depending on region.

For example, those living in the southern plains, a ranching area, wear gaucho-type clothing: baggy pants, or bombachas; cowboy hats and cowboy boots. The indigenous Amerindians in the Amazon region wear tunics and face paint and also love beads, body paint and unique hairstyles. People in the country's northeastern Bahia region, which is heavily influenced by African culture, don long skirts, head scarves and shawls. Items adorned with bordado richelieu -- a type of lace developed in 18th-century France to mimic white Venetian lace, which was brought to Brazil by the Portuguese -- are also popular [source: U Should Visit].

Another way to consider Brazilian clothing is country attire versus city attire. Those who live in the country tend to wear shirts, jeans or dresses crafted from an inexpensive cotton material. Women who reside in the city often like to wear short skirts and dresses, and both sexes of city slickers enjoy that most typical of Western attire: T-shirts and jeans. In fact, jeans are probably the single most popular items of clothing in the entire nation [source: Slide Share].

Due to its many beaches, Bermuda shorts and bikinis are popular, the latter with women of all ages and shapes, thanks to Brazil's relaxed attitude about the body. Women especially love the Brazilian bikini bottom. A more recent development, the Brazilian bikini bottom is skimpier than the norm, with a lower rise (the piece generally sits on the hip) and a back that only covers about half the buttocks. Even racier thong and G-string versions are common [source: Brazilian Bikini Bottom]. Employing a bit of humor about this, Brazilians have dubbed some of the tiniest bikinis "dental floss."

The 98-foot- (29.4 meters) tall art deco statue of Cristo Redentor (Christ the Redeemer) that towers over the city of Rio de Janeiro at 2,330 feet (699 meters) above sea level is more than a famous landmark. In 2007, the statue was voted one of the New Seven Wonders of the World [sources: Copacabana, Corcovado]. 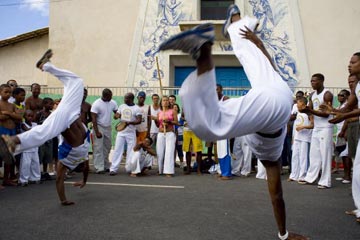 Capoeira (pronounced "cap oh AIR uh") is a mixture of martial arts, dance, acrobatics and tricks initially developed by Africans who were brought to Brazil during the slave trade era -- or it may have originated in Africa and traveled to Brazil with the slaves. The subject is hotly debated, and no one knows for sure [source: Capoeira NYC]. What isknown is that capoeira is an Afro-Brazilian art form, and it was initially used to fight slavery. Capoeira's unexpected attacks and fast, tricky movements, could easily harm the African enslavers, the white masters and other oppressors.

Africans practiced the art and taught it to each other on Sundays, their one day of rest. To ensure the white men didn't realize what they were doing, they began incorporating some of their native music, singing, dance and other rituals so it appeared they were simply having fun, not practicing a potentially harmful martial art [source: Capoeira].

When slavery ended, capoeira was used by criminals in gangs. Eventually it was deemed so dangerous that Brazilian president Marechal Deodoro da Fonseca banned its practice in 1890 [source: Capoeira]. If you were caught performing capoeira, punishment was severe; you might have the tendons at the back of your feet cut, for example. Although these harsh crackdowns nearly wiped out capoeira, it survived, thanks to practitioners' street smarts. To warn of approaching police, for example, a distinctive musical rhythm was developed and played out. And those who practiced capoeira adopted nicknames to hide their true identities from the authorities. Nicknames have become a tradition still in use today [source: Capoeira Universe].

In the early 20th century, a man named Manuel dos Reis Machado, or Master Bimba, created a new style of capoeira that was more effective and efficient in its movements. Master Bimba then convinced authorities capoeira was an important cultural institution, and the ban was ended in the 1930s. Master Bimba opened the first capoeira school in 1932, and he's considered the father of modern capoeira [source: Capoeira NYC].

Today's capoeira game involves two combatants, musicians and an audience that gathers around the two in a circle. There's a strict hierarchy to the musical instruments, with the berimbau, a single-stringed musical bow, the leader. Every rhythm played by the berimbau has a meaning (faster rhythms mean a livelier game, slower rhythms dictate a slower game with more trickery), and the audience claps along. Songs are also sung in a call-and-response pattern between one of the musicians and the crowd; songs might encourage combatants to step up the pace, for example, or ratchet up or down the violence [source: Rensselaer Polytechnic Institute]. 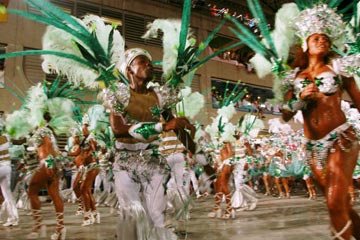 A samba school performs during the annual Carnival parade in Rio de Janeiro, Brazil. The 14 samba schools are the main attraction of Rio's Carnival, performing to approximately 70,000 spectators in a stadium built especially for the celebration.
Andre Felipe/Getty Images

Carnival (actually Carnaval in Portuguese) is a wild celebration of food, alcohol, music and fun. It's held annually for a few days before the start of Lent, the 40-day period of fasting, abstinence and repentance that's observed by the Roman Catholic Church before Easter. The word carnival comes from the Latin carne vale, or "farewell to the flesh" [source: Rosenberg].

The Portuguese brought the practice of Carnival to Brazil around 1850, patterning it mainly on the Parisian tradition of holding masquerade parties and balls at this time of the year. However, the Brazilians morphed it into a version uniquely their own over time, adding in elements from the people's African and indigenous cultural backgrounds. Thus, Carnival in Brazil eventually incorporated lots of parades, elaborate costumes, music, dancing and balls. A tradition also developed where people dress up in opposing roles: men dress as women, aristocrats dress as commoners, the poor dress as the rich.

Carnival is held all over the country; celebrations differ a bit by region, but Rio de Janeiro's celebration is the most popular, drawing crowds of 500,000 foreigners annually from across the globe [source: Rio Carnival]. One of the highlights of Rio's Carnival is its elaborate parades, staged by major samba schools. The samba schools work year-round to prepare for their Carnival parade entry, and the immense Sambodromo (samba stadium) facility was built specifically to showcase the parades [source: Just Brazil].

While all Brazilians love Carnival, the black communities are its most avid participants. This likely stems from the community's historical love of Carnival, as African slaves were freed annually for the festival's duration. In Rio, residents of the city's (largely black) favelas, or slums, are especially enamored of Carnival, joining samba schools and working hard on costumes. To them, carnival and samba are as beloved and important as soccer [source: Rio Carnival].