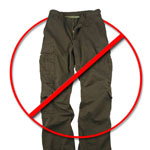 On the first Friday of May each year, thousands of people celebrate a little-known holiday called No Pants Day. Logically, they celebrate this holiday by not wearing any pants. While some clever people note that you could celebrate by wearing a dress, skirt, kilt or other pants alternative, traditionalists will argue that such clothing is not in keeping with the spirit of the day.

The history of No Pants Day is shrouded in mystery. Some say that the first No Pants Day was either in 1985 or 1986. Others point to the late 1990s as the beginning of the leg liberation movement. Most agree that the holiday has survived and thrived as a result of the efforts of The Knighthood of BUH chapter at the University of Texas in Austin, an organization dedicated to the promotion of humor and individuality. The holiday gets media attention every year, and as a result events celebrating No Pants Day have popped up in cities across the globe.

The promoters of No Pants Day claim that the holiday is really about not taking yourself seriously for a day. It's an example of surreal humor, which relies on an absurd situation (in this case, crowds of people walking around wearing no pants). Similar examples of groups indulging in surreal humor are flash mobs, where a group of people assemble at a predetermined location, engage in some activity (such as singing a song or having a pillow fight) and then disperse.

In 2007, several events across North America are planned to celebrate the holiday. They include:

The official No Pants Day Web site keeps track of events as they are submitted, so keep your eyes on that site to find out about local celebrations (whether you want to participate or actively avoid them).

For more information on No Pants Day and related topics, check out these links:

If you aren't the type who likes to spend time in jail for indecent exposure, the organizers of No Pants Day suggest you wear one (or more) of the following:

While it's true that kilts are considered "cheating," promoters and organizers of No Pants events feel that to impose strict rules on what can be worn (or not worn, as the case may be) violates the spirit of the carefree holiday. They are quick to point out that they do not own the holiday, and people may observe it any way they wish.