by Jonathan Strickland
Next 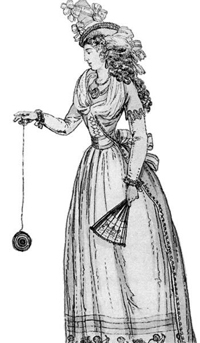 A woman playing with an early form of the yo-yo, called a "Jou Jou," from a French fashion journal c. 1791
Public domain image

National Yo-Yo Day falls on what is believed to have been Donald Duncan Sr.'s birthday (even the Duncan Company isn't quite sure if June 6 is the right date). Donald Duncan Sr. was an entrepreneur who in 1930 got into the yo-yo business, but let's not get ahead of ourselves.

Yo-yos have been popular toys for over 2,000 years. Early forms of the toy were called different names, such as quizzes, bandalores or Jou-Jous. The earliest recorded account of the word yo-yo is from an 1860 Filipino dictionary. While yo-yos (and yo-yo-like toys) have been found across the globe, the yo-yo as we know it seems to have originated in the Philippines.

In 1923, Pedro Flores, a man of Filipino descent, began building yo-yos in America. He built the yo-yos by hand, and discovered that America's youth were fascinated with them. In 1928, Flores built the first yo-yo factory, mass producing the toys in California. He also began to hold yo-yo competitions to promote the toys, which started the first round of yo-yo mania in the United States.

Donald F. Duncan Sr. first saw yo-yos in action around the time Flores began to hold competitions. He noticed how quickly the toys captured the interest of kids and decided to get into the business of making yo-yos. In 1930, Duncan bought out Flores, who was then hired to run Duncan's promotional campaigns. More competitions and exhibitions followed, and the company did well in its first few years.

For the next 25 years, all of Duncan's yo-yos were made of wood. In 1955, Duncan partnered with a company called Flambeau to produce plastic yo-yos. Two years later, Duncan retired and gave control of his company to his sons, Jack and Don Jr. Donald Duncan Sr. had seen the potential of a curious toy and turned it into a successful business. Because of his contributions to the popularity of the yo-yo, National Yo-Yo Day was later established on what is believed to be his birthday. Of course, the story of the yo-yo (and the Duncan company) doesn't end here.

The company continued to promote yo-yos in innovative ways, including the purchase of advertising on television. The interest generated from advertising was both a boon and a curse for the company. Demand quickly exceeded factory capacity, so the Duncan company began to borrow money in order to meet customer expectations. Sadly, it borrowed more money than it could possibly pay back. In addition, the yo-yo craze of the early '60s waned after just a couple of years, and profits dropped dramatically.

The Duncan company had become synonymous with the word yo-yo, so much so that Duncan claimed a trademark on the term. Other companies challenged Duncan's claim, and after a lengthy legal battle, the courts ruled that the word yo-yo was a generic term that any company could use. The money spent on litigation coupled with the decline in yo-yo profits and earlier company debts forced the Duncan company into bankruptcy.

In 1968, Flambeau purchased the Duncan name and continued to produce plastic yo-yos. The famous Duncan wooden yo-yos were discontinued and remained out of production for more than two decades. While the yo-yo fad had waned, sales remained steady, if modest. Yo-yo competitions and exhibitions were held sporadically, but weren't nearly as popular as they had been in the past.

In 1985, the Duncan company began to advertise on cable television, reaching national audiences. Five years later, a traveling historical exhibit featuring Duncan yo-yos and world champion yo-yo performer demonstrations helped ignite a new yo-yo craze in the United States. In 1996, the craze spread worldwide. It was fueled by exciting commercials, partnerships between the Duncan company, science programs in schools, and a wave of nostalgia as Duncan reintroduced the 1955 wooden yo-yo model.

A competitor in the 2004 US National Yo-Yo Competition in Chico, Calif.
Used under the GNU Free Documentation License

Today, Duncan continues to produce yo-yos along with several competing companies. Some companies focus on traditional yo-yos, while others have created innovative models with clutch systems and ball bearings to improve performance. Yo-yo competitions and events are held across the world, and it seems every few years another wave of yo-yo mania sweeps the nation. It's clear that this ancient toy will remain a popular choice for children across the world, despite its history of ups and downs.