Browse the article Flying on Halloween? You Can Wear a Costume! 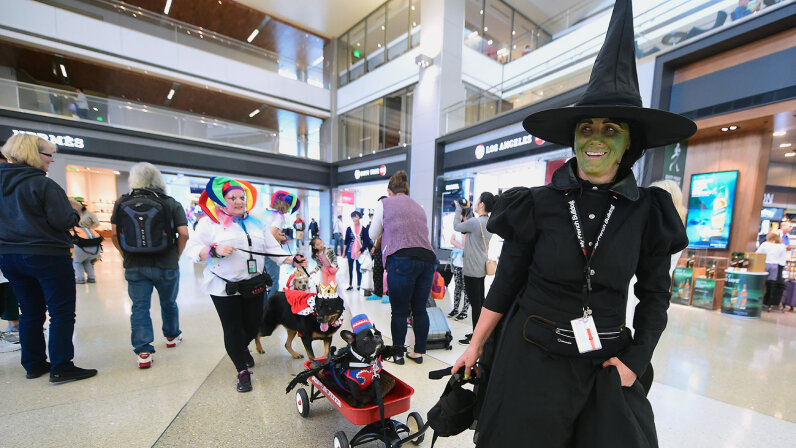 Tiffany Butcher is dressed as Wicked Witch of the West with her dog Sergio (dressed as a monkey) at the international departures terminal at Los Angeles International Airport for the Pets Unstressing Passengers PUP Howling Halloween parade in 2016. FREDERIC J. BROWN/AFP/Getty Images

Witches have it made when it comes to Halloween travel. Security wait times don't matter when you're zipping around on a broom. But what about us mortals who want to join the festivities in transit, sans frisk?

Air travel in a Halloween costume might seem a little silly, not to mention a complete TSA nightmare, but domestic security regulations for traveling in spooky attire for Halloween are actually pretty simple.

First things first: TSA. Don't try going through security with a mask on. TSA says masks are fine, as long as they're in your carry-on bag. After all, the TSA security people still need to make sure you are who you say you are.

Now, once you know how to get through security, you need to know how to deal with your airline. Remember in 2017 when United Airlines turned away a group of leggings-clad girls for what was called "improper dress"? Would they really allow a clown-costumed traveler on board? Yes and no.

It turns out United's decision centered on the fact the girls were flying as "pass riders," and therefore representatives of the company. Restrictions for regular customers — including those dressed as ghouls or goblins — are much more lenient, as long as passengers follow the airline's carriage and safety guidelines.

Take Delta, for example. Its contract of carriage states it can "refuse to transport or may remove passengers from its aircraft ... when the passenger's conduct, attire, hygiene, or odor creates an unreasonable risk of offense or annoyance to other passengers." According to a representative, this includes Halloween costumes.

American Airlines has no specific restrictions when it comes to Halloween costumes, according to a representative; its conditions of carriage requires passengers to "be respectful that [their] odor isn't offensive" (unless caused by a disability), and notes that "bare feet or offensive clothing aren't allowed."

Contracts for United Airlines, JetBlue and Southwest Airlines all follow a similar tune. So that means as long as your costume isn't smelly or offensive, and doesn't cause injury to you or other passengers (as in, don't bring weapons, fake or real), you can fly in your favorite Halloween costume — although you may have a tougher time in business or first class. Attire rules tend to be more lax in economy.

If flying in a Halloween costume isn't enough, here's another piece of good news: You can also carry on your newly decorated pumpkin. That's right. TSA is up to speed on America's love for all things pumpkin, which is why they dedicate an entire set of rules to this festive fall fruit. "Pumpkins ... are A-Okay to bring through security," the TSA website says. "Whether they are decorated or not, feel free to bring those fellas along in your carry-on." Carry-on pumpkin puree — just like fake blood — must fit in a 3.4-ounce (100 milliliter) liquid container.

NOW THAT'S INTERESTING
While TSA security officers rarely crack jokes, its informal Instagram account is both helpful and hilarious. TSA officials answer questions such as "Can we bring our dinosaur [costume] on a plane?" and "Can I bring a life-sized plastic skeleton as a carry-on?" while sharing some of the most bizarre things found or left at security, including Freddy Krueger's glove, Batman's batarangs, and a bag of eels.