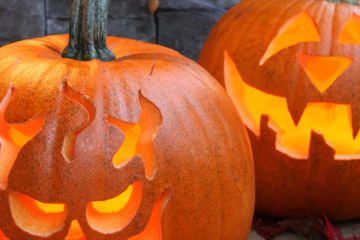 Carve your pumpkin into a work of art with one of these easy patterns.
TLC

While many of us have fond memories of carving pumpkins with a steak knife and scooping out pumpkin innards with a large kitchen spoon, pumpkin carving has come a long way.

Kids these days, with or without the help of an adult, can stencil and paint their way to the perfect Halloween pumpkin, and here we've collected five easy ways to create out-of-this-world pumpkin designs.

Want a fancifully designed pumpkin this Halloween but lack a steady hand? Try stenciling. You'll find holiday stencils in your local arts and crafts or you can download patterns through a Web search for Halloween stencils. Many are free and some let you design your own.

While you might have experience using a stencil on a wall in your home, stenciling on a pumpkin is a bit more difficult because it isn't a flat surface. For best results, tape the stencil to the pumpkin - don't be shy with the tape - and take extra care not to crease the pattern, or you could warp your design. With the stencil in place, tap or swirl a paint-loaded brush or sponge inside the stencil openings.

Why constrain kids to predesigned carving patterns when you can let their imaginations run wild on their pumpkin canvases? It's as easy as giving them a magic marker or crayon and letting them design their own jack-o'-lanterns.

Other ideas for Halloween pumpkin designs, aside from jack-o'-lanterns, include:

Once kids finish their drawn masterpieces, it's the adults' duty to finish the job and get to carving.

Sometimes you just want your jack-o'-lantern to have a familiar face - a classic Jack with triangle eyes, a triangle nose and a half moon smile, with or without pointy teeth.

Pumpkin carving patterns are easy to find at an arts and crafts store or through a Web search (usually in PDF format and often free to download). Some of our favorite patterns, scary or funny designs, can be found at HowStuffWorks.com.

According to Guinness World Records, the world's largest jack-o'-lantern weighed 1,469 pounds and was carved by Scott Cully of Pennsylvania in 2005.

Pumpkin painting is safe for young kids - nothing too sharp for anyone to accidentally cut little fingers. But painting projects can also be a detailed, intricate project for older kids with artistic flair. And because they're only painted, they will last much longer than the typical carved jack-o'-lantern, which begins to rot in about four or five days.

Got Leftover Pumpkins? Turn them into winter decorations, such as Frosty the SnowPunkin.

Shake things up in the jack-o'-lantern world by using pieces from your Mr. Potato Head set to transform your jack-o'-lantern into Mr. Pumpkin Head. While they make Mr. Potato Head pieces specifically for Halloween, most kids have a one of these classic toys on hand, with at least some pieces that haven't gone missing. Mr. Pumpkin Head won't mind only having one eye - in fact, that might be appropriate for the season!

This is a sharp object-free craft project, especially good for little ones who shouldn't be using a knife or saw to carve their pumpkin masterpiece. Getting pieces to stick into the pumpkin flesh can be a bit difficult, depending on the pumpkin's density, so strong adult fingers should be on hand.