The Story Behind Those Christmas Carols You Can't Stop Singing

by Christopher Hassiotis Dec 21, 2017
A choir group belts out some Christmas carols in Auckland, New Zealand in 2016. Think any of them know who Parson Brown is? Phil Walter/Getty Images

'Tis the season for an assault of Christmas songs, in public, in private, online and over the airwaves. And whether you're absentmindedly humming along while grinding through that morning commute or actively caroling around a piano at a holiday party, chances are good that — whether Christmas is your thing, or not — you're able to sing along to Christmas songs. But as you sing about trolling the ancient yuletide carol, have you ever stopped to wonder what that even means?

We've pulled together a quick explainer on a few of the terms you'll encounter while singing those Christmas tunes.

The 12 Days of Christmas

Advertisers and marketers love to co-opt the idea of a period leading up to Dec. 25, because the Christmas season comprises nearly 20 percent of all annual U.S. retail sales. Many jingles on television will take the tune — a song reportedly with French origins that first showed up in England in 1780 — and use it as an anticipatory song. But in most Christian traditions, Christmas Day — Dec. 25 — is actually the start of the Christmas season, which lasts all the way until the Epiphany on Jan. 6. That's the day many Christians associate with the birth, and specifically the baptism, of Jesus, and some traditions exchange gifts (lords a-leaping and otherwise) on that day, not on Dec. 25.

After its introduction in the 1944 musical "Meet Me in St. Louis," when it was sung mournfully by Judy Garland, the song "Have Yourself a Merry Little Christmas" found its way into the Christmas song canon. (That's partially thanks to a classic 1957 version by Frank Sinatra.) But when the singer pleads to the listener to "make the yuletide gay," what does that mean? In this context, gay is a synonym for happy or cheerful. But yuletide? That's come to mean Christmastime. Yule is an ancient Germanic festival held in midwinter, and tide is an Old English word for a season or era.

And speaking of yuletide, what does it mean to "troll the ancient yuletide carol"? After all, that's one of the lines carolers sing when they get about a third of the way through "Deck the Hall(s)." It's got nothing to do with a mythical creature who lives under a bridge. According to the Oxford English Dictionary, one of the meanings of troll as a verb is to "sing (something) in a happy and carefree way." Older meanings include moving about in a circular way, or singing songs in a cyclical fashion — as you might do with "Deck the Hall(s)."

And here's some holiday trivia for you: The melody of "Deck the Hall(s)" comes from a traditional Welsh song called "Nos Galan" ("New Year's Eve") that goes back to at least the early 1700s. It was a drinking song, and the lyrics "Don we now our gay apparel" used to be sung as "Fill the mead cup, drain the barrel."

The song "It's Beginning to Look a Lot Like Christmas" documents a small town's transformation in the time leading up to Christmas. Shops start to put out decorations, the mood of people turns convivial, and children start to dream about presents they might like:

A pair of Hopalong boots and a pistol that shoots / Is the wish of Barney and Ben / Dolls that will talk and will go for a walk / Is the hope of Janice and Jen.

Dolls, OK. And a toy pistol? Sure. But what the heck are Hopalong boots? When the song was released in 1951, Western movies were big, and a popular character was Bill Cassidy, a heroic cowboy dressed all in black who favored drinking sarsaparilla. He survived a gunshot to the leg, which left him with an idiosyncratic walk and the nickname "Hopalong." Around the time the song was written, Hopalong Cassidy's boots were a popular kids' item.

Christmas tunes, at least in the modern United States, tend to come mostly from the mid-20th century — when radio and television could fix notions of Christmas more easily and broadly — and from northern Europe in the 1700 and 1800s. And the mid-19th century song "Here We Come A-wassailing" endures today. But what does wassailing mean? The first thing to know in decoding these lyrics is that wassail is an alcoholic beverage — served hot, usually a mulled cider or punch. It gets its name from "waes hael," an Old English term meaning "be well."

And wassailing? That's an English tradition performed most often on the 12th night of Christmas. A band of singers would go door to door around their neighborhood, singing Christmas songs and offering drinks from a massive bucket of wassail they'd carry with them. In return, homeowners would give the wassailers a bite to eat, some sweets or a small gift. This tradition, though unfamiliar to most Americans, still shows up in a song they should know: "We Wish You a Merry Christmas." Look to the end of that song, when the singers demand the listener "bring [them] some figgy pudding," and that they "won't go until [they] get some."

If the lyrics of "It's the Most Wonderful Time of the Year" are to be believed, during the Yuletide "there'll be parties for hosting / Marshmallows for toasting / And caroling out in the snow." And all that seems to line up with what happens at this time of year. But the song continues: "There'll be scary ghost stories / And tales of the glories / Of Christmases long, long ago." It's a fair bet to say that this line raises a few questions with modern listeners, who associate telling ghost stories more with Halloween, or a night around a campfire. But what is the Charles Dickens classic "A Christmas Carol" if not a ghost story? In fact, telling ghost stories at Christmas is an English tradition that would seem completely normal to people from the Victorian era, according to historical accounts from the Paris Review and the Smithsonian. After all, what better way to spend a dark midwinter night when all your friends and family are around?

In the 1934 song "Winter Wonderland," two lovers stroll through a picturesque winter scene. The singer suggests that "In the meadow we can build a snowman / And pretend that he is Parson Brown." OK, so ... who is this guy Parson? And when the lyrics continue "He'll say, 'Are you married?' / We'll say, 'No man,'" why is he asking personal questions? If you didn't know that "parson" is a title and not a first name (comparable to, for instance, Darth Vader), the clue comes at the end of the verse: "But you can do the job, when you're in town." A parson is a Christian clergy position among some Protestant churches comparable to that of a vicar in the Catholic tradition. So a parson, as head of a regional parish, would be in a position to perform a marriage. And those of you making your snowmen at home, for marrying or otherwise, just remember — Frosty the Snowman himself had a button nose, as immortalized in the 1950 song. Carrot noses are for wannabes.

How New Zealand Became the Home of Extreme Sports

Who Was Charles Manson? 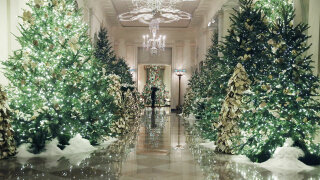 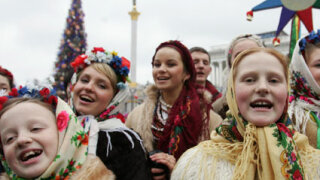 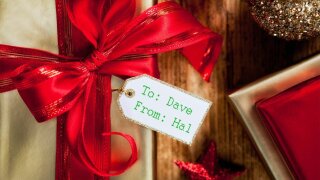 World's First AI-generated Christmas Song Is the Stuff of Nightmares