What does the poinsettia have to do with Christmas?

by Sam Abramson
NEXT PAGE 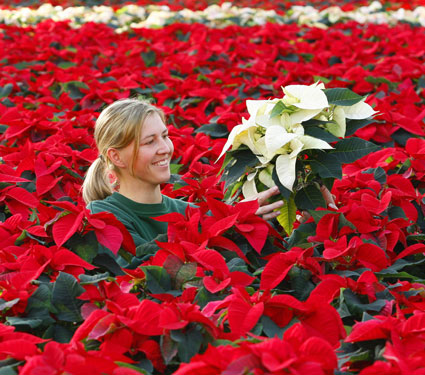 A worker sorts poinsettias in a greenhouse in Germany.
Michael Urban/AFP/Getty Images

You can find a poinsettia's scarlet, star-shaped leaves everywhe­re you turn during the holidays. Poinsettias are one of the most popular Christmas decorations around, with more than $200 million in sales every holiday season [source: University of Illinois]. But how did this plant from the Mexican countryside become a botanical staple in our season of giving? Who brought it to America? And is there any truth to the belief that munching on one of its leaves could be fatal?

Poinsettias (Euphorbia Pulcherrima) have a rich cultural history. The tropical shrubs, which have about 100 different species and reach heights of up to 12 feet tall in their natural habitat, were known as "Cuetlaxochitl" to the Aztecs and used to dye clothing and cure fevers [source: Perry]. Poinsettias were also used in Aztec religious ceremonies since the Aztecs considered the color red a symbol of purity.

Many mistake the poinsettia's leaves as flower petals, but the flowers are actually the smaller, yellow buds in a poinsettia's center. These bracts -- the upper portion of the leaves -- are famously red, although they actually bloom in a variety of hues, such as pink, white and yellow. Poinsettias, also known as the "lobster flower" or "Mexican flame leaf," bloom in December, making them an ideal holiday flower.

In the next section, we'll look at how and when the poinsettia became a popular holiday symbol. ­