Why Americans Are So Crazy About the Flag

by John Donovan Jun 30, 2017
Americans display the nation's flag in many ways, and its many iterations, from decor to clothing, are on display in Independence Day parades around the country. Ariel Skelley/Blend Images/Getty Images

As Americans, it might be healthy for us to admit that we, the people, are perhaps unnaturally attached to our country's flag.

Not that that's a bad thing necessarily. Yeah, we dig our flag. We admit it. We love to see the red, white and blue fluttering against the amber waves of grain and those purple mountains' majesty. We revere everything Old Glory stands for — life, liberty, the pursuit of happiness, a government by the people and for the people, our men and women in uniform, a good hamburger — and see no reason not to let it be known that we're generally proud of the United States of America. Warts and all.

So we unfurl that Grand Old Flag on our front porches on any day we feel like it. We turn to field-sized versions of the stars and stripes at sporting events when we rise to sing our national anthem (a song that, as we know, is all about the flag). Our kids, still, stand and pledge allegiance to the flag in public school classrooms across the country, despite efforts by many to cool it with the "under God" stuff. The flag is in our churches, too — to heck with that separation of church and state thing.

We wave flags. We literally wrap ourselves in 'em. We even, in a strangely patriotic, only-in-America way, burn them on occasion in protest (which the Supreme Court in 1989, and later in 1990, ruled is protected speech under the Constitution). Americans can sometimes look at our country through unapologetic rose-colored glasses, and the most patriotic of us do so through flag-festooned contact lenses.

The American fascination with the flag can veer between reverential and kitschy, often at the same time, visitors to the country have observed.
Hisham Ibrahim/Getty Images

"Viewed from abroad — certainly coming from the UK — it is striking when you go to the United States, how prevalent the flag is," Adam Smith, a history professor at University College London who writes about the U.S., tells HowStuffWorks. "It's pretty hard to find places in America where you can't find a flag somewhere. And that isn't true of most places."

Americans are flag-waving crazy like maybe no place on Earth. The Flag Manufacturers Association of America estimates that some 150 million American flags of all sizes are sold every year (though, granted, plenty are made in China). That means since, say, January of 2015, there's been a new Old Glory churned out for every man, woman and kid in America.

Why? What is it that makes us so bonkers for our star-spangled banner? What is it about those 13 stripes and those 50 stars that has made us elevate the flag to untouchably iconic status?

In a country these days so sharply divided along all sorts of fault lines — political, social, racial, geographic, the National League vs. the American League — why is that millions of us protect and revere the flag so?

"Our flag has become a symbol above politics. It is the symbol of that which unites us," says John Hartvigsen, the president of the North American Vexillological Association (NAVA). Vexillology is the study of flags, something that Hartvigsen has been doing with NAVA for the past 48 years. "It's very important for us to find what unites us."

The desire, the fervent need to find unity in a country that doesn't have a monarch to rally around has been present since the American revolution, Hartvigsen says, and has been reinforced throughout American history. Certainly since the Civil War, Americans have looked to the flag to remind us that we are one nation despite our differences, despite our hardships.

So in our darkest times and in our greatest triumphs, the flag has been our symbol. Over Fort McHenry when Francis Scott Key penned his poem that became our National Anthem. With Teddy Roosevelt on San Juan Hill. At Iwo Jima. In the streets of American cities during the Vietnam War. On the moon in 1969. Above the medals podium after the Miracle on Ice at the Olympics in 1980. Rising above the rubble of the World Trade Center after Sept. 11, 2001.

The 1887 illustration "A Woman in Battle: Michigan Bridget Carrying the Flag," by Felix Octavius Carr Darley, shows how the American flag was used as a rallying symbol during the Civil War.
Charles Phelps Cushing/ClassicStock/Getty Images

We go a little overboard sometimes, sure, with all the flag-waving nationalism. Certainly compared to places like the U.K., we do.

"To fly the flag in front of your house, which is obviously a perfectly normal thing to do in the United States," Smith says from London, "here you would never ... Unless you were the Queen, or ... it would just be slightly embarrassing. That's just something people don't do."

In France (another country without a monarch), Smith suggests, the French are into their flag and fly it proudly, too. Other countries, certainly, hold their flag in great regard.

"Let me just say that the American veneration of the national flag is not unique, but it is towards the extreme end of the spectrum," says Michael Billig, a professor of social science at Loughborough University in the U.K., via email. Billig examined the everyday use of flags in his 1995 book "Banal Nationalism."

American flag-decorated clothes are a mainstay of national celebrations for some. Some say they're celebratory, while others may point out that they violate U.S. Flag Code etiquette.
Kacey Klonsky/Image Source/Getty Images

"I do not know of another nation where schoolchildren are expected to salute the flag in a formal ritual every day," he says. "National flags tend to date back 250 years — they are not ancient. Even the oldest national flags were not fetishized when they were introduced as they are today."

Now, if you want to say that Americans have a flag fetish, we'd have to plead guilty. On outwardly patriotic days — Independence Day, Veterans Day, Memorial Day, Flag Day (June 14) — that star-spangled banner so proudly waves everywhere. On other days ... yeah, then too. Everywhere, everywhen.

That might seem strange, and maybe even uncouth, to people outside our borders, a blatant example of Yanks rubbing all that freedom and might and national pride in the face of the rest of the world.

"I personally find it kind of charming. I certainly don't have a problem with it," says Smith. "[But] if you're primed to be over-sensitive to American patriotic chauvinism, then you would see [this] as just well ... you roll your eyes at it: 'What would you expect from these guys?'"

America, admittedly, has some image problems when it comes to displaying our flag. We have some real problems, too, that we're reminded of every day.

But every Independence Day, we gather in public places with our flags — on runners' shorts at the Peachtree Road Race in Atlanta, on blankets and T-shirts along the Charles River as the Boston Pops play, at the Capitol Fourth in our nation's capital, throughout the fireworks display in Larned, Kansas, around the pie eating contest on the north shore of Lake Union in Seattle — and know that there's a lot to be proud of in this country. A lot to stand up for and cheer.

Once July 5 rolls around, we'll keep our flags flying. Every day after that, too, whenever we want, pasted in apartment windows and hung off trees, high above factory floors and flapping from car antennas. Yeah, we overdo things. We're Americans. But when it comes to the flag, that can be a good thing.

"It's the flag that brings us together," says Hartvigsen.

The country has perhaps as many ways of displaying the flag as there are people.
John Lund/Blend Images/Getty Images
Now That's Interesting
As much as Americans revere the flag, we revere free speech more, meaning it's not illegal to desecrate it (though the Senate has come close to passing a Constitutional amendment to outlaw desecration of the flag on a few occasions) or to use it in pretty much any fashion desired. Still, the flag is "protected" under the U.S. Flag Code, which outlines general principles, suggested display and proper conduct toward the flag.

What Wind Power Critics Who Cry 'Bird' Get Wrong 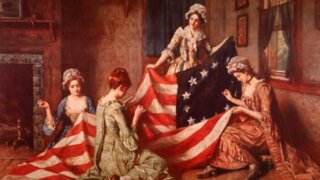 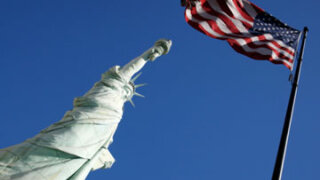 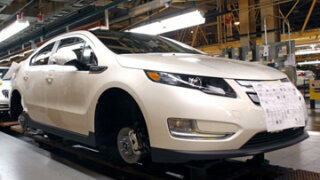 How is owning a hybrid vehicle patriotic?