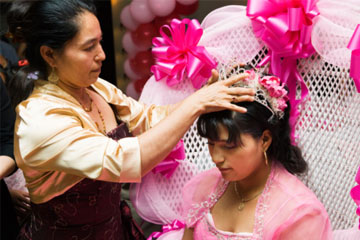 To visually trace the origins of quinceañera festivities that happen in the United States, run a finger down a map of the Western hemisphere into the heart of the Mexico. In that ancestral home of the Aztec Indians, whose empire thrived during the 1400s and early 1500s, young girls were considered marriage-ready at the age of 15 [source: Alcarez]. As a result, they went through ceremonial rites of passage that included parental speeches beseeching their adolescent daughters to become wise, upstanding women [source: Alcarez]. Then the Spanish invaded modern-day Mexico and overthrew the Aztecs in the 1520s, bringing their European influence to the indigenous people. The upper class debutante aspects of quinceañera likely emerged as a result of that [source: Alcarez].

Quinceañera as we know it today, celebrated by thousands of girls around Central America and the estimated 400,000 Hispanic girls who turn 15 every year in the U.S., actually didn’t become ingrained in the Hispanic cultural fabric until recently. Prior to the 1960s, quinceañeras were occasions reserved for the upper classes [source: Alcarez]. As more Latinos have immigrated to the U.S. and their communities have assimilated into American society, quinceañeras have spread across all rungs of socioeconomic classes as a newfound expression of ethnic pride both in the United States and Latin America. In the same way that American rites and customs easily traverse state lines, quinceañeras have also become a shared tradition throughout Latin America, including cordoned-off Cuba. In this way, these Sweet 15s have become as much a way to commemorate the past as celebrate the future.

The growing popularity of quinceañeras hasn’t always sat well with the Catholic Church, however. A quince girl’s public commitment of faith is an integral part of the event, but the surrounding regalia has threatened to completely overshadow any religious spirit, especially as quinceañera budgets often balloon beyond $25,000 [source: Plummer]. In 1990,the Los Angeles Archdiocese issued stricter guidelines for permitting quinceañera Masses, including rules that attempt to limit the size of the quinceañera parties at Mass and allow priests to bless multiple quince girls at once, since the parties were beginning to constrain the number of weddings and baptisms churches could perform [source: Legon].