Did French kissing start in France? 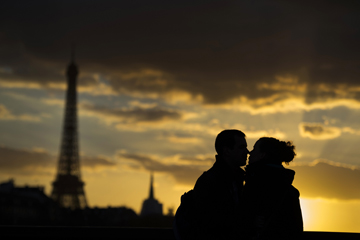 French kissing didn't begin in France, but the West might have the country to thank for its popularity.
Martin Bureau/AFP/Getty Images

Human beings indulge in a range of affectionate behaviors, including hugging, kissing, handshakes and high-fives. But one of the most curious of couplings is the so-called "French kiss," where the tongues of two people make contact, presumably for the purpose of sexual stimulation. French kissing is a well-established expression of love across many of the world's cultures, but the first person to try it must have been quite brave. Who was this person?

References to open-mouth kissing appear in a number of ancient texts, with the earliest mention appearing in Sanskrit works around 1500 B.C.E. [source: Kirshenbaum, The Daily Beast]. In the famous Kama Sutra text from the third century C.E., the places on the body designated for kissing include lips and the interior of the mouth, suggesting that tongue kissing was being practiced in India by that time [source: The Kama Sutra of Vatsyayana].

One hypothesis for the evolution of tongue kissing is that it occurred as a natural consequence of feeding offspring in mammal populations [source: Lorenzi]. However, this doesn't explain why the practice was adopted in some human societies, but not others. There are multiple instances across the globe of human communities that had never heard of tongue kissing before contact with Europeans — and were disgusted by the very suggestion of it [source: Foer].

Interestingly, the French had no specific word for its famous export until very recently. The verb galocher, defined as "kissing with tongues," was added to the French dictionary Le Petit Robert in 2014 [source: Neuman]. Appearing in this popular yet unofficial dictionary doesn't give any mere collection of letters the credentials of a proper French word, however; there is no mention of galocher in the Academie Francaise, the 378-year-old regulator of the French language [source: Dewey].

These days, French kissing is so popular that a team of Japanese researchers recently invented a French kissing machine, in which couples that are separated are able to connect via straw-like devices that work through a computer [source: Yin]. That's some impressive dedication to a long-distance relationship.

Based on these facts, it's clear that French kissing did not begin in France. However, it's equally clear that we have the open hearts (and mouths) of French lovers at the start of the 20th century to thank for the term. Merci beaucoup!