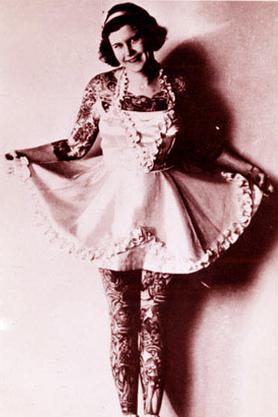 Tattoos have been around for more than a few generations.
DCL

3300 B.C. -- Otzi the Iceman dies in the Alps. His frozen, preserved corpse is discovered in A.D. 1991; it bears the oldest examples of tattooing yet found. Scholars aren't sure whether his tattoos are decorative or evidence of acupuncture, but either way, Otzi makes his mark on tattooing history.

2000 B.C. -- Upper-class Egyptian women and priestesses are tattooed with a series of dots over the abdomen, thighs and breasts. Scientists hypothesize that these tattoos are a form of protection during pregnancy, since the abdominal markings would expand to cover the woman's belly as it grew.

A.D. 316 -- Roman Emperor Constantine bans the practice of facial tattooing. His rationale is that man has been created in the image of God, and so to defile the face is to disgrace the divine.

720 -- Body art goes out of fashion in Japan when officials begin using tattoos to punish criminals. This lasts until the 17th century, when tattooing is replaced by other punishments. Decorative tattoos quickly become fashionable once more.

922 -- While visiting what is now Russia, Arab diplomat Ahmad Ibn Fadlan encounters a group of heavily tattooed traders from northern Europe. Ibn Fadlan describes the tattoos as dark green lines and pictures, extending from the tip of each man's toes to his neck.