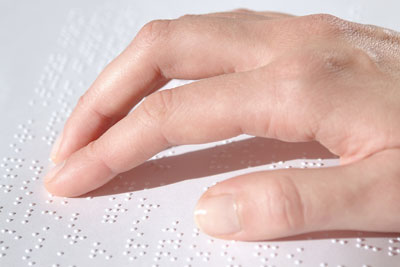 Reading Braille involves moving the fingers from left to right across the page.
Photo courtesy Dreamstime

A six-dot Braille cell allows 63 possible combinations of dots. This might sound like plenty -- after all, the Latin alphabet as used in English has only 26 letters, and you can represent any real number with the numerals 0 through 9. But in addition to letters and numbers, there are a wealth of punctuation marks. Then, there are symbols used in science and math and musical notes that also need Braille counterparts. Basically, anything a sighted person could read from a printed piece of paper needs to have a representation in Braille.

For this reason, many languages have multiple Braille codes. For example, in the United States, the Braille Authority of North America (BANA) publishes standards for several codes, including:

A few specialized codes use eight-dot cells rather than six-dot cells. For example, an eight-bit ASCII code uses one Braille character to represent each ASCII character.

Braille characters can have multiple meanings depending on which code is being used. While this is necessary to make 63 combinations of dots to represent an infinite range of letters, numbers and symbols, some people find learning multiple codes to be confusing. For this reason, the International Council of English Braille (ICEB) has created Unified English Braille. Unified English Braille includes symbols for literary material, math, science and computers. In other words, it consolidates three other Braille codes.

In addition to reducing the number of codes people have to learn, Unified English Braille has the potential to standardize Braille for all English-speaking countries. A few countries, including Australia and New Zealand -- which used to use English Braille, American Edition -- are transitioning to it from other systems. Currently, Great Britain and the United States continue to use their own systems. In Great Britain, the Braille Authority of Great Britain (BAUK) publishes Braille systems. The British and American systems have essentially the same alphabets but use different notations for science, math and computers.

Reading other languages can also require learning additional Braille codes. Even languages that use the same Latin letters that English uses often have their own specific letter combinations and contractions. Welsh, for example, has several two-letter combinations represented with one Braille cell.

Braille characters can represent virtually any language, regardless of how that language is written. In Chinese Braille, the characters represent the sounds that make up the spoken language. Hebrew Braille uses cells to represent the letters of the Hebrew alphabet and contractions specific to that language. Tibetan Braille is one of the newest Braille codes. Sabriye Tenberken created the code so that she could read Tibetan manuscripts independently. She then traveled to Tibet to teach blind Tibetans to read and write in Braille.

Along with entirely new Braille codes for different languages, there are ongoing efforts around the world to standardize and improve Braille. Many countries have departments and agencies that continually evaluate their Braille codes and suggest changes or improvements. In addition, technological changes can also affect Braille. Improved materials and circuitry have led to more effective refreshable Braille displays, which can continually display lines of text translated from computer screens and e-books. New display prototypes can be rolled up like paper. Web-Braille allows libraries to download and print Braille materials rather than wait for them to arrive in the mail. In the future, Braille books, magazine displays are likely to become more efficient and flexible, as well as less expensive.

To learn more about Braille, blindness and related topics, check out the links below.

Braille and the Law

Until the 1960s, most blind children in the United States attended residential schools for the blind and took classes in Braille. In the 1970s and 80s, more blind children began attending mainstream classes in public school, where teachers did not necessarily know how to read or write Braille. This led to a decrease in Braille literacy, and some people began to argue that listening was equivalent to literacy in blind children. However, other educators assert that learning Braille is vital to a blind child's education. Many advocates of Braille education also argue that learning Braille as a child is easier than learning it as an adult, making childhood Braille education both practical and necessary.

Now, the Individuals with Disabilities Education Act requires that schools in the U.S. provide Braille instruction for blind students and students with low vision who may need to use Braille later in life. This includes children who can see well enough to read large print or read with a magnifying glass but who may eventually lose their vision.