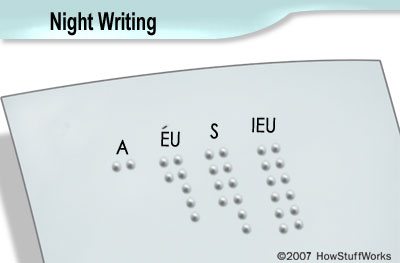 An example of the cells used in night writing

In 1828, Charles Barbier, a visitor to Royal Institution for Blind Youth, introduced Louis Braille to a tactile dot code known as night writing. Barbier had invented the code to allow soldiers to communicate with one another in the dark, but his idea hadn't caught on. It used dots to represent 36 phonetic sounds rather than the letters of the alphabet. Some of its characters were six dots tall.

Louis Braille realized that the same basic idea could give blind people an efficient method for reading and writing. Through trial and error, he figured out that a six-dot cell was small enough to fit under a fingertip but had enough possible dot combinations to represent a wide range of letters and symbols. He used this cell to create an alphabet using tactile dots and dashes.

A Braille cell has six dots.

The Braille cells used today are two dots wide and three dots tall, and they no longer use dashes. You can represent each dot's position within the cell with a number. Dots one, two and three are on the left side of the cell, and dots four, five and six are on the right side. A cell with one dot in position six indicates that the next cell represents a capital letter, and a cell marked with dots three through six signifies that the next cell represents a number. The Braille characters for the numbers zero through nine are the same as for the letters "a" through "j."

A typical line of Braille is about 40 characters long, and a typical page of Braille is about 25 lines long. In other words, Braille takes up significantly more room than standard-sized print. Braille pages are also thicker and heavier than ordinary paper, and they have to be bound in a loose format so that pages can lie flat and people can reach the cells near the book's binding. This leads to relatively bulky books. For example, the Braille version of "Harry Potter and the Half Blood Prince" is eight volumes long. Its longer predecessor, "Harry Potter and the Order of the Phoenix," is fourteen volumes long.

To conserve space and make the reading process a little faster, many people learn to read contracted Braille, previously known as Grade 2 Braille. Uncontracted Braille, or Grade 1 Braille, uses characters to represent single letters, numbers and symbols. Contracted Braille uses characters to represent letter combinations or whole words. There are close to 200 contractions in the American version of English Braille. These include commonly-used words like "and," "you" and "for" as well as letter combinations like "ing" and "ed."

We'll look at the process of learning to read and write Braille in more detail in the next section.

Braille and the Brain