Where did the legend of Bloody Mary come from? 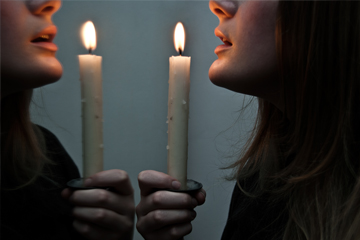 Nobody really knows how long people have been telling the story of Bloody Mary.
Elizabeth Livermore/Getty Images

Standing in front of a mirror in a darkened room with a candle, chanting "Bloody Mary, Bloody Mary" won't cause a cocktail to appear (as much as some people might hope!). However, according to legend, the ritual might cause a ghastly apparition to materialize. Are you brave enough to try it yourself?

Many a girl at a slumber party has played the Bloody Mary game, or at least heard of it. Nobody really knows how long people have been telling the story of Bloody Mary, but historians began attempting to trace the roots of the story in the 1970s [source: Dube]. The details of the Bloody Mary "game" tend to vary, but the basic tenets are always the same.

The participant enters a darkened room with a lit candle. She or he looks into a mirror while chanting Bloody Mary's name or a phrase a specific number of times. If the ritual is performed correctly, Bloody Mary might either appear in the mirror, reach out of the mirror and scratch the participant's face, or be released from the afterlife to haunt him or her forever. Other versions of the story include the mirror dripping blood, the participant's hair turning white, or the participant disappearing without a trace.

Sometimes the ritual involves chanting simply "Bloody Mary," whereas other versions involve chanting, "I believe in Bloody Mary" or even "I killed your baby, Bloody Mary."

Folklore experts searching for the origins behind the legend of Bloody Mary came up with several theories.

A unique, quite Freudian take on the legend by folklorist Alan Dundes suggests that the story is an initiation ritual into womanhood. He notes that the Bloody Mary legend revolves around blood suddenly appearing, and that the ritual typically takes place in a bathroom with girls who are right on the edge of puberty [source: Dundes].

However, other theories put the origins of the story in a more historical perspective. Bloody Mary may have been one of the following women, all of who might have a good reason to come back from the afterlife to wreak havoc among the living:

Regardless of where the story began, Bloody Mary provided (and continues to provide) many a night of haunted excitement for anyone game enough to try it. With the other classic superstitious elements of mirrors and magic rituals, Bloody Mary is sure to remain a popular legend for years to come.