What's a birth caul, and why are people superstitious about it? 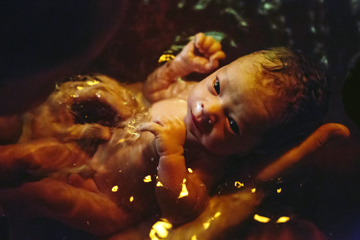 There are many ways to predict a child's brilliance, but is the appearance of a birth caul a good indicator?
mshallenberg/Thinkstock

With less than one in every 80,000 babies born with a caul, it comes as no surprise that superstitions and stories surround this mysterious and rare phenomenon [source: babyMed]. Believed to be the mark of something special, a birth caul may appear startling and sometimes frightening for the mother, but the majority of the time, it's just a minor and harmless part of the birth process.

A birth caul (Latin name, Caput galeatum, meaning "head helmet"), is a piece of the amniotic sac still attached to a newly born baby's head or face. In extremely rare cases – called an "en caul birth" — a baby emerges fully inside the amniotic sac, which looks like a thin and filmy membrane. Some call this condition "born with a veil." A caul happens when a piece of the sac breaks away during gestation or during the birthing process and attaches itself to the baby's head. The doctor or midwife simply peels away the caul without issue, although in rare cases, if the caul is tightly adhered to the baby's head, they must take great care not to tear the baby's skin.

Many cultures consider a baby born with a caul a sign of good luck. Chances are this belief comes from the rarity of the condition, but many fascinating stories about birth cauls abound throughout history. Let's look at just a few.

Roman midwives sometimes stole cauls and sold them to lawyers, who believed possession of a caul would help them win their cases. This superstition also extended to Iceland, Denmark and England. Some other cultures believed a potion including powered caul could cure malaria. In the country of Dalmatia, placing a caul under a dying person's bed was believed to make one's passing easier. In Belgium, the child would be lucky only if the caul was buried in a field. And coal miners would carry cauls with them to ward off fires and explosions [source: Forbes]

Many superstitions about cauls originated in Great Britain. In 1889, a British newspaper reported a "miracle" caul, although later on a more rational explanation emerged. A baby was born with a caul, which was removed without incident and placed to the side. A few hours later, someone picked up the caul and noticed the words "British and Foreign Bible Society" impressed on the caul. Word spread in the village and the incident was noted as a holy miracle. Later on, though, the attending doctor realized that when he moved the caul to the side, he placed it upon a bible, which had raised lettering on the cover — transferring the words to the caul [source: Koerth-Baker]. Still, word of the divine intervention, as it were, stuck.

Some believe those born with a caul are very lucky and immune from drowning for the rest of their lives. However, at least in one instance, this immunity only lasts as long as you keep the caul. An anecdote from around 1939 talks about a young boy who drowned at one year old after his mother threw his caul away. Regardless, because of the belief that a caul made one immune to drowning, many families sold birth cauls to sailors for a good amount of money [source: Roud].

While you might be feeling lucky to be born a "caulbearer" and might even believe you have supernatural gifts as a result, it's important to remember that caul births are a natural (if rare) part of giving birth, and that en caul births most commonly happen when the birth is premature. [source: babyMed].