Other people who made yoga popular in the West 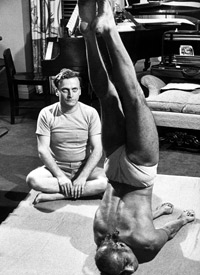 There were many other people who helped popularize yoga in the West beside the Beatles. The yogis Sri Krishnamacharya, Swami Sivananda, Sri Yogendra and Swami Kuvalyananda all tried to make ancient yoga texts applicable to modern culture. These teachers made efforts to include women and foreigners in their circles. They promoted Hatha yoga, the yoga of physical processes. They also believed that Indian philosophy could coexist with Western science and medicine.

The yogis helped establish connections to the Western world. However, it was their students who really helped spread the study of yoga. Some of Swami Sivananda's students included Swami Satchitananda, who presented yoga at Woodstock, and Swami Vishnu-devananda, who established ashrams around the world. The influential Bellur Krishnamachar Sundaraja Iyengar was a student of Sri Krishanamacharya.

B.K.S. Iyengar was born in 1918 in Bellur, India. He was a sickly child who fought to overcome influenza, malaria, tuberculosis and typhoid fever. Doctors believed he would not live past age 20. Iyengar studied yoga under his brother-in-law, Sri Tirumalai Krishnamacharya, who is credited with modernizing Hatha yoga. By 1937, Iyengar was teaching yoga himself, hoping to spread the study that he believed had saved his life.

Iyengar's teachings spread to the West when he met the famous violinist Yehudi Menuhin in 1954. Iyengar demonstrated the yoga poses that eventually became known as Iyengar yoga. Menuhin was so impressed by the yogi and the study that he arranged for Iynegar to travel with him and spread yoga. In 1966, Iyengar wrote "Light on Yoga," which described and illustrated over 200 yoga asanas, or poses. Three million copies have been sold since the book's publication. In 2004, Time Magazine named Iyengar as one of its "100 Most Influential People" for his role in bringing yoga to the West. Iyengar continues to supervise classes at his institute in Pune, India.

To learn more about yoga, health and music, look over the links below.