America's Past Presidents Had Some Really Weird Habits

If you think today's U.S.president is rather idiosyncratic, take heart. A lot of the past U.S. presidents have had plenty of weird habits as well, say Will Pearson and Mangesh (Mango) Hattikudur in a new episode of Part-Time Genius.

In the episode "Who's Our Weirdest President?" Will and Mango look at several candidates for the title. Martin Van Buren (No. 8), for example, thought he could cure his chronic stomach pain by downing a mixture of soot, charcoal and water. Calvin Coolidge (No. 30) had an even stranger health remedy. "Apparently he enjoyed having petroleum jelly rubbed all over his head every morning, while he enjoyed his breakfast in bed," says Mango. "I don't know exactly why he thought this was a good idea for his health, but he did."

When White House physician Admiral Joel T. Boone decided Herbert Hoover (No. 31) needed to lose weight and become fitter, Boone created a game called "Hoover-ball." A combination of tennis, volleyball and medicine ball, the game was designed for two teams of two to four players. Six days a week, Hoover and four to 18 VIPs would play the game early in the morning. Hoover only cancelled once after the game was invented, when he had to pen a speech to Congress.

John Quincy Adams (No. 6) was fond of skinny dipping at 5 a.m. as a means of relieving stress. And he didn't keep this practice a secret. That supposedly led to an incident astonishing by today's standards. "Journalist Anne Royall reportedly landed a big interview with John Quincy Adams by hiding his clothes after he got in the water," says Will. "She then refused to give them back until he answered her questions, which of course he did."

Under the category of superstitions, many people may recall Nancy Reagan's penchant for astrology. Both Ronald Reagan (No. 40) and his wife, Nancy, were believers. After Reagan survived an assassination attempt in 1981, the two leaned more heavily on the practice. So heavily, in fact, that Reagan's entire schedule was planned according to his astrology charts, including the take-off and landing times of Air Force One, the presidential airplane.

But that may seem like nothing when you learn that Jimmy Carter (No. 39) spotted a UFO. In 1969, while attending a Lion's Club function in Georgia, Carter and some buddies saw a strange, bright object in the sky. The object was so unusual, the group reported the sighting to the International UFO Bureau.

Podcast guest Cormac O'Brien, author of the recently updated book "Secret Lives of the U.S. Presidents," says all of these presidential shenanigans really aren't that unusual. Because when you think about it, who would want to become president? It's a demanding, stressful job. And in the end, you're often remembered mainly for your failures and flaws.

"So yes, on the one hand, a lot of these guys have been strange, or unusual-quirky-bizarre," O'Brien says. "But on the other hand, should we be surprised since they were drawn to office in the first place?"

To learn more about the oddball habits of America's leaders (including Franklin Roosevelt and Thomas Jefferson) as well as what was behind the choice of the four presidents on Mount Rushmore, download "Who's Our Weirdest President?"

Now That's Interesting
John Tyler, America's 10th president, served from 1841 to 1845. And although he was alive when George Washington was in office, he has two grandsons who are still living. This unlikely event is possible because one of Tyler's sons, Lyon Gardiner Tyler, Sr., had two sons in the 1920s -- Lyon Gardiner Tyler, Jr. and Harrison Ruffin Tyler -- when Lyon was in his 70s. 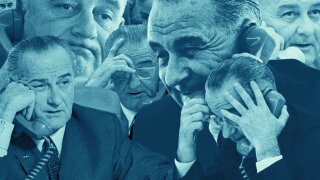 Ridiculous History: LBJ Talked on the Phone More Than a Teenager 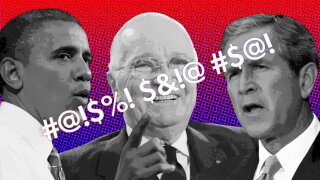 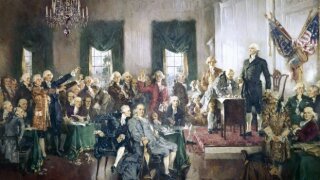 10 Little-known Facts About the Founding Fathers