by John Donovan Sep 27, 2019
For thousands of people today, Aleister Crowley is best known as the father of Thelema. Hulton Archive/Getty Images/HowStuffWorks

A self-proclaimed beast, a pop culture touchstone, the "wickedest man in the world," a devoted practitioner of the occult and "magick" — we'll get to that "k" in a bit — the late Aleister Crowley was, first and last, a sharp poke in the eye of the conventional and dogmatic.

Back at the turn of the 20th century, Crowley was a purposely out-there fellow, someone who so delighted in shocking his contemporaries and thumbing his nose at high-necked society that he eventually became, to some, a counterculture icon. Years after his death, he famously appeared on the psychedelic cover of Sgt. Pepper's Lonely Hearts Club Band, the Beatles' 1967 album. Ozzy Osbourne sang a song about him. (Mister Crowley/What went down in your head?/Oh, Mister Crowley/Did you talk to the dead?) A counter-religion, Thelema, sprung from his writings.

Yet Crowley remains, to many, more than the odd headline. To them, he is a true prophet, a man of exceptional intelligence and vision. To others, he never was anything more than a misogynistic, drug-addled, sex-maniacal, self-involved, self-promoting pig.

That dazzling dichotomy might be just how Crowley preferred things.

"He tended to be very polarizing," says Western New York state resident Norman Fleck, who has counted himself among the followers of Crowley's teachings for decades. "He didn't treat people very well. He threw people under the bus all the time. And unfortunately, that's what a lot of people focus on.

"Our outlook is on his magical works, primarily and not his disgusting behavior. I can tell you right now, if I met Crowley on the street, I probably wouldn't like him. But in terms of the magical world, there's nobody in the same league that he is."

The Start of an Enigma

Aleister Crowley was born into wealth in 1875, in England, and died poor, in England, in 1947. In between ... well, in between he was a very busy man who took a very different path through life.

The son to the heir of a brewing fortune, Crowley was well-educated as a young man but quickly rebelled against his father's strict Christian outlook. At Cambridge University, he became (among his many obsessions) a nearly preternatural chess player, a published poet and a skilled mountain climber. He also traveled extensively. He became voraciously sexually active (and, biographers say, had his first homosexual relationship). He may have, some say, been recruited into being a spy for the British government.

And — this is the big one — Crowley dove deeply into the occult.

By the time he was 25, Crowley had become a member of a secret society known as the Golden Dawn, where he practiced ceremonial magic, the ritual use of drugs, and what was known as sexual magick. Often. That didn't please a lot of people, even those — sometimes especially those — that he knew.

"A lot of what he did was designed to be shocking. Especially the sexual license that he took," Phil Stevens, a cultural anthropologist at the University at Buffalo, says. "Crowley knew very well that he was riling people. He did that intentionally. He was intentionally amoral.

"He was taking a lot of risks with his sexual variations. But it was all part of his ego."

The drugging and sexing and secret magical ceremonies, Stevens reminds us, were undertaken at a time when all of that was scandalous in almost all of the world and outright illegal in many parts. That didn't stop Crowley. It may have emboldened him.

"I always felt that Crowley could have done better had he not engaged in some of those activities," Fleck says. "But that's my opinion."

Birth of a Religion

For thousands of people today, Crowley is best known as the father of Thelema, whose guiding ideology — some consider Thelema as much philosophy as religion — is condensed into a simple phrase:

"Do what thou wilt shall be the whole of the Law." It's often shortened to "Do What Thou Wilt." The phrase that accompanies it is, "Love is the law, love under will."

If that sounds a lot like the 1960s mantra of "do your own thing," or an entreaty to find your purpose in life and pursue it, that's probably not far off.

The idea — which carries an implication that you can do your own thing as long as it harms no one else — came to Crowley in the early 1900s while on a trip to Egypt with his wife, Rose. There, he reported, he heard a voice that dictated to him, over the course of three days, what would become perhaps his most famous written work, on which Thelema is based: The Book of the Law. (An excerpt: "This book explains the Universe.")

Still, more than the religion he founded, Crowley probably is best known for how he practiced Thelema and other anti-mainstream doctrines that he dabbled in throughout his life.

That is, through all that sex and magic.

Aleister Crowley liked to be known as the "Great Beast" and the "wickedest man alive."
Hulton Deutsch/Corbis via Getty Images

"I have said that the word magic is one of the most semantically loaded terms in the English language. Witchcraft is almost as complex," Stevens says. "These are complicated words."

When Stevens and others speak of magic in the context of these belief systems, strike David Copperfield from your mind. This is something else entirely.

Crowley — who stuck the "k" on the end of the word to differentiate it from the three-card monte and disappearing elephant kind of magic — defined magick, in Magick: Book 4, as "the Science and Art of causing Change to occur in conformity with Will."

Magick often is performed in a ritual group setting — think spooky Hollywood here — but it can be done alone. Fleck explains further:

"I do a formal magic ceremony for about 45 minutes a day, based on some of my work, based on some of Crowley's work. It's done primarily through what we call an astral projection ... I close my eyes and sit in a manner that allows [me] to focus [my] inner energy on a specific goal. It's very much like an Eastern meditation, done by monks. They're putting themselves into a different state of consciousness.

"It's a focus of psychic energy," says Fleck, who has been at this some 50 years. "You can look at that any way you want. Your skeptic would say, 'Those people are deluding themselves.' Having been there and having done it for many, many years ... I don't believe that I'm deluding myself. It's all in the work. We're not trying to pull rabbits out of a hat. Magick with a 'k' is not sleight of hand. Magick with a 'k' is directing energy according with a person's will."

Some of Crowley's magick sex rituals incorporated — this is where Crowley lost a lot of people and gained the reputation for being one out-there fellow — the ritual digestion of, ahem, sexual fluids.

That practice, of course, made Crowley a pariah among the conventional religious masses and led to wild charges that he sacrificed and even ate children. (The OTO refutes and explains those rumors here.) For that reason, and others, Crowley was dubbed "the wickedest man in the world" by the English press. The British weekly John Bull titled a 1923 piece, "A Man We'd Like to Hang."

Crowley was said to be a devil worshipper, too, and a Satanist, which is kind of true but misses the larger picture. Again, from the OTO:

"Aleister Crowley was a systematic and scientific explorer of religious practices, techniques and doctrines. As such, he performed devotional exercises to Satan as well as to Jesus Christ and the Virgin Mary, to various deities from the Egyptian and Hindu pantheons, to Jehovah as well as to Allah, and to the divine personifications that are unique to the system of Thelema."

It certainly didn't help Crowley's reputation that, on a personal level, he sometimes tended toward abusive. Said one of Crowley's biographers, Lawrence Sutin: "Whatever one thinks of Crowley's sexual morés— and Crowley could be lustful and crude and, at times, even vicious toward his partners — sexuality as a means to gnosis [defined as a knowledge of spiritual mysteries] became, from the middle decades of his life, a guiding reality for him."

Throughout his life, Crowley maintained his voracious appetite for not only sex, magic and the search for spiritual knowledge, but also for drugs, including heroin, hashish, cocaine and many others. He often wrote of his experiences with mind-altering substances. His first published novel was "The Diary of a Drug Fiend."

Crowley died at age 72, in 1947 — many believe drug addiction was as a contributing factor — but his writings and his outrageously against-the-grain lifestyle continue to inspire rebels and spark wild rumor. One totally unfounded suggestion that's popped up within the last few years is that Crowley, during one of his sex rituals, fathered a future first lady of the United States.

A 13th century Scottish estate that he stayed in for some time, the Boleskine House, is being restored and promises to become a pilgrimage of sorts for Thelemites and other Crowley faithful. The place was owned at one time by Led Zeppelin guitarist Jimmy Page, too. (Page is a Crowley fan. The first pressing of Led Zeppelin III, the band's 1970 studio album, reportedly had engravings that included, "Do what thou Wilt.")

Like the man himself, Crowley's legacy is complicated. Among those that Crowley influenced in one way or another, Stevens says, are Gerald Gardner, who's responsible for bringing the Pagan religion known as Wicca into modern prominence; American Anton LaVey, who founded the Church of Satan; and Scientology founder L. Ron Hubbard.

Other than the occasional weird tie-in (like the rumor concerning the first lady), we haven't heard much of Crowley lately, though there are said to be a few thousand Thelemites around the world, people like Fleck who continue to practice.

Still, the Beast — Crowley's tongue-in-cheek name for himself, and one that several biographers say was first stuck on him by his exasperated mother — is never far from the headlines.

"I have a feeling that a new wave of occultism will rise again. There's always an occult fringe, a weird fringe ... they will move into the mainstream from time to time. Various bits of Crowley's wisdom will re-emerge," Stevens says. "He's not dead. He will emerge again."

Now That's Interesting
Perhaps the most famous photo of Crowley is the cut-out used on the Sgt. Pepper's album cover (top row, second from left), where his head is clean-shaven and he is peering intently into the camera looking a bit like Uncle Fester of the Addams Family. It's not clear which one of the Beatles requested Crowley's likeness to be included, but it's widely believed to have been John Lennon, who was regarded as a bit of a rebel himself. 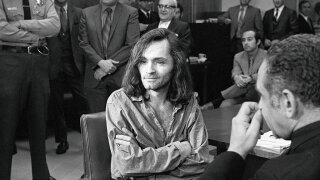 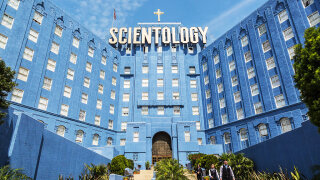 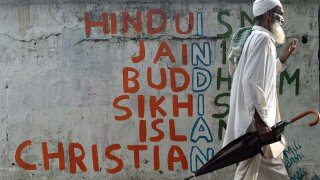