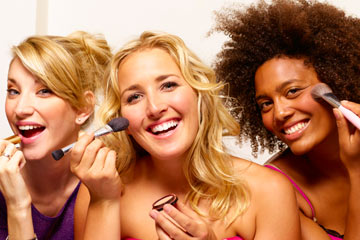 For many women, the ritual of putting on makeup and the camaraderie of doing so with friends is one of the best things about cosmetics.
Peter Dazeley/Photodisc/Getty Images

Beauty and humans' pursuit of it can be a tricky subject to unravel. What makes one person's face more appealing than another's face? Isn't beauty in the eye of the beholder? Is beauty attained through the use of products true beauty or a falsification?

Researchers believe that we all come programmed with beauty detectors, and we're wired to seek out appealing faces, no matter the culture in which we live. There have been countless studies in which participants rate the attractiveness of faces, which has led researchers to conclude that beauty could be distilled to a mathematical formula -- we appreciate symmetrical faces, in which the nose is so many millimeters from the eyes, in which the lips are in the right spot between the nose and the chin. These standards are different for male faces than for female faces. Researchers also believe that we're wired to find youth more attractive than old age, particularly when it comes to choosing a mate; after all, if you select a woman too old to bear your children, your line dies out, evolutionarily speaking.

Makeup, then, researchers believe, is a way to highlight and amplify female features and youth. Men and women have similar faces until puberty, at which point hormones like testosterone give men angular faces with prominent brows and noses. In comparison, women have smaller noses, prominent cheekbones, longer eyelashes and plumper lips, and their eyes seem bigger because of the lack of a prominent brow. Makeup plays up these female features, thus advertising an absence of male hormones [source: Etcoff]. Eye shadows, eyeliners and mascara all make those small eyes pop. Blush emphasizes the cheekbones, and lipstick shows off plump lips. Foundations and concealers help us present smooth skin, a sign of youth and health. These may be subliminal ways that women demonstrate their gender and their youth to potential partners. All of these cosmetics may be an evolutionary urge to show off our most feminine traits so that we can attain a universal beauty ideal.

Of course, while we might be born with innate beauty standards, beauty ideals are shaped by external forces such as advertising and pop culture. Would we care so much about the shape of our eyebrows if we didn't see certain starlets or models rake in millions for their appearances? It's these external pressures that particularly grate the nerves of women's rights advocates. We'll explore the tricky relationship between makeup and feminism on the next page.