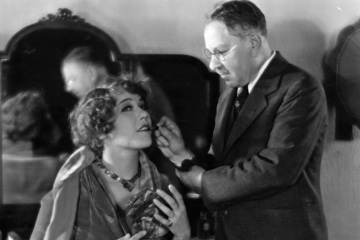 At the very end of the 1800s, portrait photography became popular. People would save up to sit for the one picture they'd ever have of themselves, and applying makeup before that picture became standard. Mirrors also became more affordable at this time, and more people owned one in their homes. These two factors were important in the development of makeup, but nothing would play a greater role in the mainstream use of cosmetics than motion pictures.

When actors made the transition from stage to screen, they brought with them very heavy makeup regimens that were designed to make them visible to the very last row -- a look that didn't translate very well on camera. In 1914, Max Factor, who provided wigs to Hollywood studios, developed a greasepaint foundation that wouldn't cake or crack. The greasepaint was popular with movie stars both onscreen and off, and it marked Factor's first major success in the cosmetic industry. Factor would go on to develop lip gloss and an eyebrow pencil, and he popularized the word "makeup." In the 1920s, he began marketing his makeup to the public with the claims that they could look like their favorite movie stars.

A few years earlier, in 1915, T.L. Williams started the Maybelline Company. Williams' sister, Mabel, had what he thought was an ingenious way to make her lashes look striking -- she mixed petroleum jelly and coal dust. Williams distilled the formula into cake form and eventually found great success in selling it to the public.

Around the same time, major advancements were being made in the production of nail polish. Prior to the 1920s, nail care consisted of buffing one's nails, and buying a car meant purchasing a black one from Henry Ford. Ford used black lacquer paint on his vehicles because it dried more quickly than other colors, but other companies begin formulating fast-drying lacquer paints in multiple colors to compete. These quick-drying lacquers were co-opted by other businesses, including cosmetics companies. The main ingredient was nitrocellulose, which was also used in smokeless gun powder and false teeth.

It was Charles Revson, who co-founded Revlon, who made nail polish popular in the United States. In the 1950s, Revson spearheaded some advertising campaigns for matching nail polishes and lipsticks that are still lauded to this day. He tied the personality of his potential customer to the product, most notably in the "Fire and Ice" advertisements -- if you were the type of woman who wanted to bleach her hair platinum without her husband's consent, for example, then you were the perfect candidate for this new color of lipstick and nail polish. Revson was threatened, however, when a new kissproof lipstick entered the market to great acclaim. In the 1950s, chemist Hazel Bishop developed the formula for a lipstick that would stay put, and the success of her product resulted in "the lipstick wars" between Bishop's company and Revlon.

Ultimately, Bishop didn't prove herself to be as canny an entrepreneur as Revson and other personalities of the time. Estée Lauder was a voracious marketer who gave out free samples and gifts of the skin cream she developed with her uncle. Lauder's empire would go on to include Clinique and Origins, among other companies.

With rapidly improving products and persuasive marketing efforts, women were sold on makeup, and they haven't looked back since. But when someone picks up Maybelline mascara or Revlon lipstick, what exactly are they getting? We'll go inside the tubes on the next page.