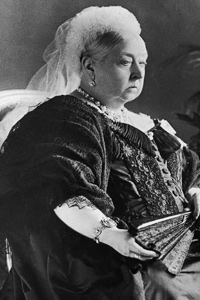 Queen Victoria (1819-1901) made a public declaration that makeup was vulgar and improper, due to its connection with prostitutes.
FPG/Taxi/Getty Images

The first use of prototype cosmetics is usually traced back to the ancient Egyptians; many Egyptian tombs contained makeup canisters and kits. Cleopatra used lipstick that got its hue from ground carmine beetles, while other women used clay mixed with water to color their lips.

Most notable, though, was the ancient Egyptians' use of kohl. Both men and women would paint the kohl, a mixture of metal, lead, copper, ash and burnt almonds, all around their eyes -- picture a football player with grease paint under his eye combined with Tammy Faye Baker and her excessive use of mascara. The circles of kohl were meant to ward off the evil eye and dangerous spirits and were also handy in deflecting the harsh desert sun. In recent years, scientists have determined that the kohl makeup may have inadvertently helped the Egyptians ward off infectious diseases; the lead would kill off bacteria, though if the Egyptians had had longer life spans, the lead might have eventually killed them off as well [source: Bhanoo].

The ancient Greeks and Romans also painted their faces with powders made of ground-up minerals and stones, but the history of makeup becomes a little less colorful as time goes on -- quite literally. From the Middle Ages until the end of the 19th century, pale skin was in. Only prostitutes and lower class women would have dared use color on their lips, cheeks or eyes. Instead, women painted their faces, necks and chests with a lead and vinegar mixture known as ceruse. Elizabeth I of England, with her white face and large forehead (the lead in ceruse would often cause hair to fall out), is quite representative of this look, which was popular for centuries. And though women today might like to joke about how they suffer for beauty, women who used the lead-based ceruse often ended up with muscle paralysis or in their graves.

At the dawn of the 20th century though, products that we'd recognize today -- lipsticks, mascaras and nail polishes -- began to emerge. On the next page, we'll examine the birth of the modern-day makeup industry.