by the Editors of Publications International, Ltd. & Clint Pumphrey
Prev NEXT
7 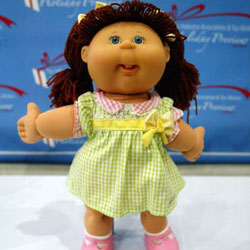 It seems like every Christmas season has its "must-have" toy. In 1983, it was Cabbage Patch Kids.

The dolls, originally known as Little People, were invented in the late 1970s by art student and Georgia native Xavier Roberts. Initially, they were handmade and sold from BabyLand General, a flagship store in Cleveland, Ga., where children could witness the "birthing" process before signing the adoption papers and receiving the doll's birth certificate. After Roberts appeared on the television show "Real People" to promote his creation in 1980, sales spiked, catching the attention of toy manufacturer Coleco. The company began mass-producing the dolls in 1982 under the name Cabbage Patch Kids, selling them for between $20 and $40 each (though the handmade dolls from BabyLand had sold for about $125).

Demand was so high during Christmas 1983 that stores across the nation were running out of the dolls. In some locations parents even became violent in an effort to get their hands on one of the few dolls still in stock. By the end of 1983, stores had sold more than 3 million Cabbage Patch Kids, and many orders remained unfilled. Sales of the dolls peaked in 1985 before falling, along with Coleco's fortunes. In 1988, the company filed for bankruptcy, but since then toy manufacturers like Hasbro, Mattel, Toys "R" Us, and Play Along Kids have carried on the brand. BabyLand General still produces the dolls for a new generation of Cabbage Patch Kids fans.