by the Editors of Publications International, Ltd. & Clint Pumphrey
Prev NEXT
8 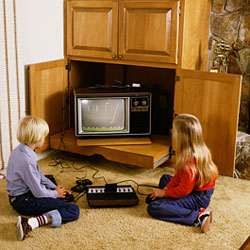 Is this what your den looked like in the early '80s?
Dennis/Hallinan/Getty Images

Given their boxy graphics and simple interface, it might be hard to remember just how revolutionary home video game consoles were in the 1980s. When the decade began, the Odyssey was still game console No. 1. But it didn't take long for the Atari 2600 to take over the market, with games like "Space Invaders," "Breakout," "Missile Command" and "Combat." Mattel released a competing system in 1980 called Intellivision, which boasted slightly better graphics than its older counterpart and featured the first synthesized voices in video games. Coleco jumped into the fray as well, releasing the Colecovision in 1982. These consoles featured interchangeable game cartridges, which meant players weren't stuck with the games that came preloaded on earlier systems. They were a big hit -- perhaps too big.

By 1983, the once unstoppable video game industry fell onto hard times. A glut of new gaming systems and low-quality, unlicensed cartridges turned off consumers and opened the door for personal computers like the Apple II and Commodore 64 to gain a foothold in the market. Then, the home video game industry rebounded in 1985, thanks to Nintendo, a Japanese company that originally manufactured playing cards. It released the Nintendo Entertainment System with legendary games like "Super Mario Bros.," "Metroid" and "The Legend of Zelda," and licensed other high-quality games including "Contra," "Final Fantasy" and "Techmo Super Bowl." Nintendo's final success of the decade was the Game Boy, released in 1989. The first major handheld gaming system, the Game Boy opened up exciting new possibilities for the video game industry as the 1980s came to a close.