by the Editors of Publications International, Ltd. & Clint Pumphrey
Prev NEXT
10 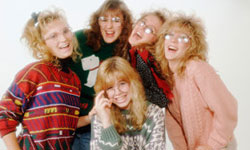 Did you, like, realize that in the '80s, like, everyone totally got pulled into this thing called Valspeak? Seriously!

The term Valspeak was used to describe a way of talking that combined 1960s surfer slang, hippie lingo and black street jargon. It originated in southern California's San Fernando Valley, and gained national attention in 1982 when Frank Zappa and his daughter Moon Unit came out with the song "Valley Girl," lampooning the fad.

Valspeak talkers tended to raise their inflection at the end of a sentence, making a declarative statement sound more like a question. The elongation of words and phrases like "totally" and "for sure" also characterized the dialect. Notable Valspeak words include "skanky" (gross), "rad" (excellent), "geek" (weird) and "rolf" (vomit). Perhaps the most lasting effect of Valspeak is the proliferation of the word "like" in everyday speech -- just ask any high school English teacher.