by Stephanie Watson & the Editors of Publications International, Ltd.
Prev NEXT
3 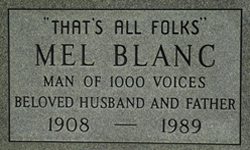 Who hasn't heard of the "Man of a Thousand Voices?" When Mel Blanc died of heart disease and emphysema in 1989 at age 81, 20 million people listened to his voice daily -- though he was such a vocal chameleon they may not have even realized it was him. During his career with Warner Brothers, this versatile voice actor created some of the most famous cartoon characters in television history, including Bugs Bunny, Porky Pig, Yosemite Sam, Woody Woodpecker, and Sylvester the Cat. It was Blanc who gave Bugs Bunny his catchphrase, "What's up, Doc?" And viewers always knew they'd reached the end of the cartoon when they heard his Porky Pig say, "That's all folks!" When Blanc was buried in the Hollywood Forever cemetery, he made this closing line his own final farewell.