by Stephanie Watson & the Editors of Publications International, Ltd.
Prev NEXT
9 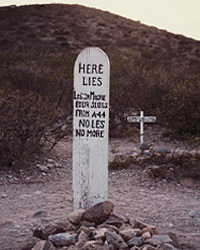 The birth date of this Wells Fargo agent is not recorded, but the cause of his death, in 1880, couldn't be clearer. The .44-caliber in question belonged to a customer named Frank Dunston, who was reportedly angry over a package that arrived late -- and damaged. Dunston was so angry he shot Moore. Before Moore hit the floor, he fired off a shot that killed Dunston, but it was already too late for him. Moore was laid to rest at Boot Hill Cemetery in Tombstone, Ariz., where he shares ground with several gunslingers who also met with a violent end, including three men who were killed during the infamous gunfight at the O.K. Corral.