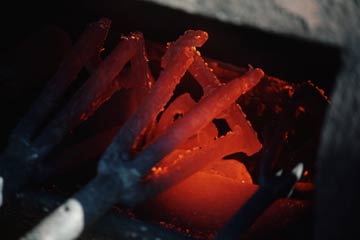 These irons are getting red-hot for some cattle branding. The procedure for branding people is not that different.
© Dewitt Jones/CORBIS

Human branding has a sordid past. In Colonial America, burglars had their hands branded with a "B" to mark them as thieves [source: Cox]. Drifters in 16th-century England were often branded on their chests with a "V" for vagabond, announcing their low social status. In that same era, English slaveholders might brand the cheeks of runaway slaves [source: Parman].

In so-called "civilized societies," human branding has almost always stood as punishment, but that's just part of the story. Some ancient tribal cultures used branding, and other "scarification" methods like cutting, in initiation rituals, often to mark young men as full, adult members of their tribes; in some areas of Papua New Guinea, the practice continues today [source: Guynup]. A number of all-black U.S. fraternities, too, have for decades practiced body branding to signify allegiance and brotherhood, though the practice is consistently condemned by their fraternal parent organizations [source: Battle].

Indeed, many body-modification outsiders see human branding as rather horrific, and most people are shocked to see burn scars in the shape of Greek letters – or in any obviously intentional design. Of late, though, the shock has begun to subside. As happened with face tattoos and ear stretching, the once rare, jarring body brand is slipping slowly into a more general "alternative" status.

A growing number of eager volunteers are paying professional body artists hundreds of dollars to be branded. Others, unwisely, are branding themselves and their buddies at home with the likes of wire hangers or soldering irons, saving money and dramatically increasing the risk of serious infection, all to bear the scar-tissue design of their dreams.

If they can bear the second strike, manage the complex aftercare, and endure the extended healing period, and if their bodies' response to burn damage is ideal for the intended aesthetic, the results can be striking. Still, with so many ifs, why not just get a tattoo?

Because the act of branding itself is a big part of the appeal. Of course, what exactly that appeal is depends a lot on who you ask.