Why has the World Trade Center memorial been delayed?

Browse the article Why has the World Trade Center memorial been delayed? 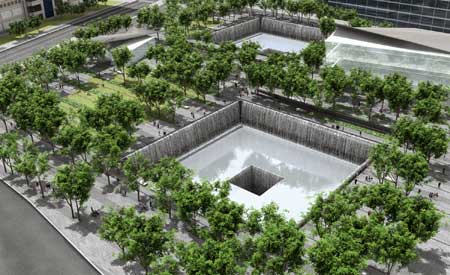 In a "60 Minutes" interview, New Orleans Mayor Ray Nagin reportedly answered a question about flooded vehicles with the statement, "You guys in New York can't get a hole in the ground fixed, and it's five years later. So let's be fair" [ref]. The HowStuffWorks staff decided to do a little research on why, or whether, the project is behind schedule.

After the September 11, 2001 terrorist attacks, many people assumed that the World Trade Center site would become a memorial. But first, officials had to remove the debris from what came to be known as Ground Zero. The process of debris removal ended ahead of schedule and under budget in the spring 2002.

New York Governor George E. Pataki and then-Mayor Rudolph Giuliani created the Lower Manhattan Development Corporation (LMDC) to oversee the rebuilding of lower Manhattan. In April 2003, the LDMC announced a contest to design a September 11 memorial. Thirteen jurors reviewed 5,201 entries to select a winner. In January 2004, the jurors announced that they had selected "Reflecting Absence," a design by Michael Arad and Peter Walker.

"Reflecting Absence" incorporates two large voids to represent the destroyed towers. The voids are square reflecting pools that are approximately the same dimensions as the footprints of the original World Trade Center towers. The proposed design also includes an underground museum.

Waterfalls cascade into viewing pools that approximate the size and shape of the original towers.
Rendering by Squared Design Lab/courtesy LMDC

Construction on the memorial started in March 2006. However, construction soon stopped, reportedly because of concerns that the project was becoming too expensive. Work resumed in August 2006 after officials revised the design to meet a tighter budget.

The construction is currently scheduled to be complete by September 2009. Between now and then, the LMDC will dissolve and transfer its control of rebuilding efforts to the New York Port Authority.

Check out these links for more information on the World Trade Center memorial.

There have been several interim memorials on the World Trade Center site. For example, the Tribute in Light used spotlights to create beams of light that represented the fallen towers. The Tribute in Light shone in March and April of 2002.