Will pulling out a gray hair cause 10 more to grow in its place? 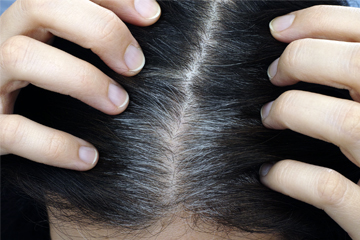 Plucking, in general, can cause trauma to your hair follicles. Would you rather have gray locks or none at all?
Ekaterina Minaeva/Thinkstock

Many of us try to delay the process of going gray. As the old Clairol hair dye commercial used to say, "Only her hairdresser knows for sure." Others embrace going gray, like journalist Anderson Cooper, whose gray hair earned him the nickname "The Silver Fox."

The appearance of that first gray hair takes most of us by surprise. Our first instinct is to pluck it out, but then we remember that old wives' tale -- "If you pull out a gray hair, 10 more will pop up to take its place." Who wants to risk that? However, as with most pieces of folklore, you might wonder if this one is actually true. The short answer is that no, plucking out a gray hair won't cause 10 more to grow in its place. A gray hair will grow back, but the key word is "a." Just one hair. In extreme cases, however, a hair might not grow back at all. You should actually avoid pulling or plucking out a gray hair altogether.

Hair turns gray as we age because the pigment cells in our hair follicles age, too. The cells either die off or begin losing their ability to make the color that transfers to the shaft of hair. This process results in gray or white hair. As a side note, the timing of this process is genetic, which is why some people go gray earlier than others [source: Rope].

When you pull out a hair, it comes out of its follicle. A follicle can only produce one hair, and since pigment cells affect only the follicle in which they're located, they can't turn any surrounding hairs gray. The reason it might appear that more gray hairs grow in, though, is that hair turns gray very slowly. Because the graying starts deep in the follicle, the hair follicles around that first gray hair may have already started turning. You just didn't know it yet. And by the time the hair you plucked grows back, the hairs around it have become visibly gray. The old wives' tale actually appears to be true, but it's simply an illusion.

However tempting it may be, try to refrain from plucking out any gray hairs you might notice. Plucking, especially repeated plucking, causes trauma to the hair follicle. You can cause an infection, scarring, and, in the worst-case scenario, a bald patch. If you really must get rid of that one gray hair and don't want to dye it, experts suggest that you carefully cut off the offending strand instead [source: Kraleti].