Why is it good luck to spit on a new baseball bat? 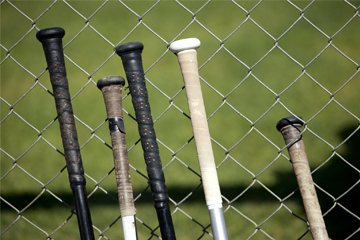 Spitting on a baseball bat upon first use is probably nothing more than a confidence booster.
hept27/Thinkstock

If you ever played sports, or if you're a sports fan, you likely know that players can be a superstitious lot. Especially in professional sports, where so much rides on a win, players employ all sorts of rituals to ensure a successful game. These rituals and superstitions can range from the simple to the absolutely wacky. Some are universal, and some are unique to individual players.

Sports psychologists say that superstitions are a coping mechanism for players. Even though a player's performance depends on skill and practice, a ritual may help boost self-confidence in a stressful situation [source: Caine]. Many athletes -- and it seems baseball players especially -- believe if they don't perform these rituals, they'll bring bad luck upon themselves and the game. And the thing about rituals and superstitions is that they don't hurt anyone. A superstition like wearing the same socks throughout the playoffs doesn't cause harm (except maybe to the people who have to smell them).

One very common baseball superstition is spitting on a new baseball bat. Meant to bring good luck to the owner, it's unclear where this good luck ritual came from. A related superstition is that spitting into your hand before picking up the bat also brings good fortune. We're not sure where these and other classic baseball superstitions originated, but a guess is that way back when, one person did it with successful results and the ritual slowly spread, enduring through time.

Spitting is a common theme in superstitions worldwide. Thought to ward off evil spirits and bad luck, saliva is a charm against witchcraft in many cultures. This superstition dates back centuries [source: Brewer]. You see a lot of spitting in baseball as it is -- tobacco juice, sunflower seeds, spitting saliva in the dirt. In fact, a lot of baseball superstitions and rituals aren't exactly hygienic. Here are just a few examples.

A wad of gum stuck to your hat is supposedly good luck. Not washing any of your gear or apparel (even your underwear) will keep a winning streak going. This one might only be unhygienic if nature calls, but it's also bad luck if a dog walks across the baseball diamond before the first pitch. Then there are superstitions maintained by specific players. Ball player Moises Alou used to urinate on his hands in the belief that it prevented him from getting blisters. Mark McGwire wore the same protective cup he used from high school throughout his professional career. Turk Wendell would chew four pieces of black licorice every inning he went to the mound, but in his defense, he also brushed his teeth between every inning [source: Pepper Baseball]. College ball player Alex Sawelson bites his bat before every pitch. Finally, one of our favorites: supposedly Jason Giambi wore a gold thong to break out of a slump. We're unsure as to whether or not he washed it in between games, but maybe that's one superstition where we're better off not knowing the details. 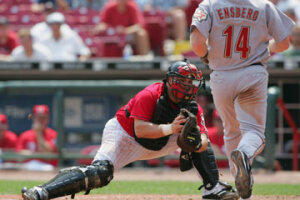 What are the 9 baseball positions?