Why are mermaids on ships' prows considered good luck? 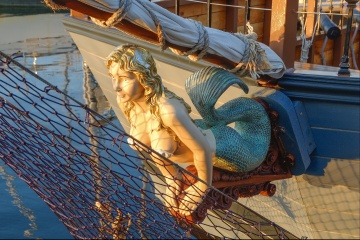 Sailor superstitions seem to go back as far as sailing itself. With so many uncertainties on the sea, being at the mercy of the weather and the whims of the ocean, sailors employ many good luck charms and superstitions to give themselves a sense of control over an uncontrollable situation.

The myths of the mermaid and the merman can be traced back to Babylonian times, when they were represented in sculpture as Oannes, the fish god. These half-human, half-fish creatures were irresistible to sailors, even though they were often associated with bad luck — legends say that mermaids would lure sailors off course with their wiles, sometimes to their deaths. The relationship was clearly complicated, however: Some folklore reveals men married mermaids, even though their attraction may have led to a watery demise.

To further muddle things, another myth says that a mermaid figurehead on the prow of a boat brings good luck to all aboard, even though women were often forbidden to board ships because they were thought to bring bad luck. Superstition held that women angered the sea gods, who would punish the sailors by conjuring up violent weather and rough waters. Some captains took this so seriously, they would toss women overboard if the weather began to turn.

The burning question, then, is why would a mermaid figurehead bring a boat good luck? Apparently, fully clothed females were no good, but a topless woman would calm rough seas — the scandal of a bare-chested woman would shame nature into behaving itself. Mermaids, as it happens, are typically topless, so using a mermaid figurehead on the prow of a ship pacified the sea gods, assured good weather and pointed a safe way back to port. Many sailors still use these figureheads today, as a nod to tradition.