Who's in Charge of Investigating Deaths in Antarctica?

by Dave Roos Mar 8, 2017
Flags of the original 12 signatory nations of the Antarctic Treaty fly next to a bust of Admiral Richard Byrd at McMurdo Station on October 21, 2005 in Antartica. Rob Jones/National Science Foundation via Getty images)

In May 2000, Rodney Marks, an astrophysicist spending the winter at the South Pole, died suddenly after an acute illness. He'd been vomiting blood and hyperventilating during the 24 hours before his death. Because no flights could land during the frigid winter, Marks' body had to be stored for months until late October and then autopsied in New Zealand, Antarctica's nearest neighbor.

The mysterious death touched off an international incident. Marks was an Australian working on a U.S. base (Amundsen-Scott South Pole Station) and the investigation into his death was being handled in New Zealand. If it turned out to be ruled a homicide, where would the case be tried?

It's not a simple question. Despite being the temporary home for thousands of scientific researchers, civilian staffers and a few hardy tourists, Antarctica is literally a no-man's land. According to the 1961 Antarctic Treaty, the snow-packed continent belongs to no nation, which makes criminal jurisdictions a messy affair.

In the United States, if you commit a crime, you are tried by either a state or federal court, depending on the type of crime and where it took place. American courts even have jurisdiction for certain crimes committed outside the nation's borders, like a murder on a ship flying the American flag, or a crime at a U.S. military base or installation overseas. Pretty straightforward.

Antarctica, though, is anything but straightforward. Dr. Alan Hemmings is an expert on Antarctic governance and spent two winters at the South Pole with the British Antarctic Survey. In an email interview, he explains that there are no clear legal jurisdictions in Antarctica, because there are no recognized territories.

Seven countries — Argentina, Australia, Britain, Chile, France, New Zealand and Norway — make pie-shaped territorial claims on the icy wasteland, and the United States and Russia exercise sovereignty at their own research stations. But none of these claims are officially recognized by the Antarctic Treaty, and a few of them even overlap.

Instead, Hemmings says, the general rule is that a crime committed by a U.S. citizen at a U.S.-owned research facility would be prosecuted in a U.S. court. The same for Russia, New Zealand, Japan or any other of the 29 countries operating research stations in Antarctica.

"But if the dead person and the alleged murderer are from different states [countries] and don't recognize each other's claim (and most don't), particularly if the critical events occur away from anybody's station — say, at a camp site — then it won't necessarily be clear who has jurisdiction," Hemmings says.

As far as Hemmings knows, there's never been a criminal prosecution for a murder committed in Antarctica. That's not to say the frozen continent is free from violence and vice. The dark and frigid Antarctic winter, coupled with long stretches of isolation or cramped cohabitation — plus loads of heavy drinking — have driven many to the brink. Stories circulate of a Russian man who killed a companion over a chess game, and of a researcher sick with cabin fever who burned down his own station.

Ultimately New Zealand claimed legal jurisdiction in the Marks case, since it had possession of his body. An investigation uncovered no clear evidence of foul play, so there were no arrests or prosecutions. The leading theory is that Marks drank a bad batch of liquor, as his autopsy showed his body contained lethal traces of methanol.

Hemmings believes that in the event of a particularly heinous crime involving citizens from different countries, the parties "will likely cooperate with each other and may very well agree that one of them takes jurisdiction, or come up with some imaginative solution."

But some legal observers are concerned that goodwill and cooperation aren't enough, and that the decades-old Antarctic Treaty needs to be updated before a truly messy crime happens on the ice. In a 2003 paper on the legal "Wild West" that is Antarctica, Towson University law professor W. Michael Seganish proposed that the 22 nations that made up a governing  committee for Antarctic affairs establish a unified criminal code.

Currently, "one cannot easily determine whether an action is a criminal act because of the various countries involved and multiple bases for jurisdiction. This is an intolerable situation for a criminal defendant and violates any reasonable concept of due process," Seganish wrote.

In the absence of such an international agreement, there's no saying how or where an Antarctic murderer would be called to justice. This issue may become increasingly important as more and more nations and corporations eye Antarctica's rich oil reserves for future exploitation.

Now That's Interesting
In 2008, the official coroner's report on Rodney Marks was released, which did not say how Marks came to be poisoned. The New Zealand coroner noted that the National Science Foundation (which is in charge of the Amundsen-Scott South Pole station) and Raytheon Polar Services (which handled base operations) would not cooperate with the investigation.

One Vaccine Breakthrough in the 1960s Has Prevented 10 Million Deaths

Mars Has a Magnetosphere Problem. Inflatables Could Help

Scientists Reveal What Living and Working in Antarctica Is Really Like

How Concerned Should We Be About This Massive Crack in Antarctica? 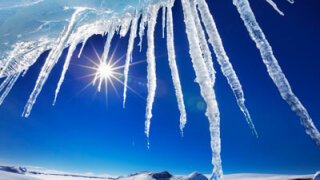 Can you vacation in Antarctica?