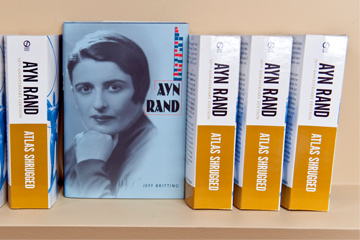 There are thousands of think tanks in the world. There's even one devoted to introducing people to Ayn Rand's novels and her philosophy of objectivism, and it's headquartered in Irvine, California.
© Brian Cahn/ZUMA Press/Corbis

Given that little history, you can see how criticism of think tanks abounds. Although they often bill themselves as "independent" and media outlets may portray think tank experts as "neutral," that's not always the case. That ties into perhaps the biggest criticism: the funding mechanism for think tanks. The organizations get most of their money through donations by large businesses, major foundations, private individuals and charities, as well as income from consulting and research. They are not required by law to list their donors.

That's a problem if you believe that think tanks often tailor messages to mimic the ideology of donors who demand results. For example, in recent years, conservative billionaires have funneled $120 million to 100 groups and think tanks hoping to discredit climate change science and redefine the political debate as a "wedge issue" for conservative politicians. Campaign-finance reform rules have allowed donors to support political causes like this without breaking the law [source: Goldenberg].

In 2013, weekly magazine The Nation revealed that the positions of the left-leaning Center for American Progress and other Washington think tanks are shaped by the interests of their donors.

"Nowadays, many Washington think tanks effectively serve as unregistered lobbyists for corporate donors, and companies strategically contribute to them just as they hire a PR or lobby shop or make campaign donations," wrote Ken Silverstein in the article.

Moreover, think tanks are not obligated by law to release their financial statements, nor do they have to reveal their donors. As a result, people don't know if a study is impartial [source: Silverstein].

Critics also see a nefarious relationship between corporations and think tanks. For example, the foundation run by Charles and David Koch, billionaires who run the second-largest privately held company in the United States, supports the work of the conservative Heritage Foundation and the centrist Woodrow Wilson International Center for Scholars, among others. The Walton Family Foundation (read: Wal-Mart) funds a variety of conservative think tanks. They also support centrist institutions that have backed President Obama's Affordable Care Act. Why would the conservative foundation lend its support to a pro-Obama think tank? Critics say the group supported a law that would force employers to pay for their employees' health insurance. The reason: The law would have driven up health care costs for Wal-Mart's small business competitors [sources: Wiesenthal, Carp].

Still, scholars say that actual "bought and paid for" research is rare, although some think tank researchers are unlikely to publish a study or an essay that infuriates their bosses or major donors. Moreover, the clash of money has often caused some think tanks to self-censor on issues in which they have been vocal about out in the past [source: Troy].

Think tanks are highly influential. As result, we can expect more of them. Moreover, experts say, think tanks will become more political, adding to the intellectual and partisan din coming from government.

When it comes to modern think tanks, it is best that all of us take a page from Plato, founder of the first think tank, and Arcesilaus, who became head of Plato's Academy long before any of us were born. Both were skeptics. Think tank experts are oft-quoted, as are their studies and essays. It's our job as citizens to look skeptically at what they say and what they promulgate.