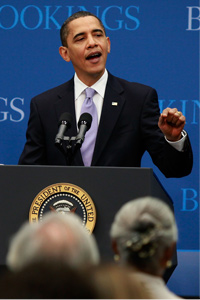 Think tanks typically dole out the advice on a particular issue, but sometimes it's the other way around. In this picture, President Obama speaks about job creation and economic growth at the Brookings Institution on Dec. 8, 2009, in Washington, D.C.
© Mark Wilson/Pool/Corbis

After World War II, think tanks began playing an important role in the shaping of government policy. People regarded them as academic organizations that took a nonpartisan, scholarly approach to public policy issues. Their proliferation in the United States was pushed along by their tax-exempt status, which was codified in 1913. In the 1950s, Congress refined the limits on what think tanks could and could not do politically if they wanted to keep their tax-exempt status. They had to straddle a thin line between information and partisan activity. They couldn't offer support to specific parties or candidates; they could only educate [source: Troy].

While many think tanks still carry on objective work, some now have narrower, partisan agendas. Scholars have called these institutions "advocacy" think tanks. They serve as training grounds for activists and for politicians and policy makers who wait to take the reins of government again. For example, after Democrats were beaten in the 2000 elections, party members, progressive intellectuals and activists started the Center for American Progress, a liberal economic organization. Although it bills itself as a "nonpartisan" educational organization, CAP's stated goal is to "develop new policy ideas, critique the policy that stems from conservative values, challenge the media to cover the issues that truly matter, and shape the national debate" [sources: Troy, Center for American Progress].

In 2008, with the Democrats in ascendancy, conservatives and members of the Republican Party formed right-of-center think tanks to move the United States down a more conservative economic path in the hopes of regaining the White House [source: Troy].

Regardless of size, ideological bent or issue, all think tanks have one thing in common: to influence public opinion and policy. After World War II, Brookings was instrumental in rebuilding war-ravaged Europe by helping to design the Marshall Plan. During the early days of the Cold War, the Council on Foreign Relations helped shaped a policy of containment, which the Western democracies used against the communist Soviet Union [source: Troy].

In the 1980s, the Heritage Foundation drafted an extensive, conservative political agenda for Ronald Reagan's transition team. The agenda contained more than 2,000 recommendations that United Press International called "a blueprint for grabbing the government by its frayed New Deal lapels and shaking out 48 years of liberal policy." Reagan's team tried to implement more than two-thirds of those proposals during his two terms. On the other side of the aisle, the Progressive Policy Institute offered numerous proposals that Democratic President Bill Clinton turned into policy actions, including AmeriCorps and Al Gore's attempt to "re-invent government" [sources: Blasko, Troy].

Tallying Up the Tanks