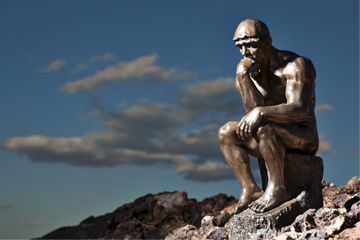 It may be clichéd, but we're willing to bet that a lot of think tanks have Rodin's Thinker sitting somewhere in their offices.
Wesley VanDinter/iStock/Thinkstock

Think tanks reign as the place where scholars, policy makers, government officials, politicians and other folks work to find solutions to public problems. If you envision a group of people sitting in a huge fish bowl, hands on their chins, contemplating the fate of humanity, you wouldn't be too far off the mark, sans the allusion to Rodin's Thinker. In the past 50 years or so, these thought factories have come to play an enormous role in shaping public policy, not only in the United States but across the globe [sources: Shaikh, Troy].

Not all think tanks are created equal. Some are concerned with political issues. Others study defense or scientific issues. Many spend their considerable intellectual capital on economic and social issues.

Despite their recent prominence, think tanks aren't terribly new. One of history's greatest thinkers, Plato, founded what some consider the world's first think tank: The Academy. Plato's Academy was located in a garden just outside ancient Athens where he and other scholars discussed a variety of philosophical issues including the benefits of skepticism. For instance, they once decided that knowledge was uncertain and life was essentially a craps game based on probability rather than absolute truth [source: Internet Encyclopedia of Philosophy].

Fast-forward to 1831 when Great Britain's Duke of Wellington established the Royal United Services Institution [source: Rohrer]. Across the pond, the first international affairs think tank sprang up in the United States in 1910 with the Carnegie Endowment for International Peace, and it's still active today.

The Brookings Institution, founded by philanthropist Robert Brookings in 1916, could be the archetype of the modern think tank. Growing out of the reform-minded Progressive era in the early 1900s, the nonpartisan Brookings Institution claims to be the "first private organization devoted to the fact-based study of national public policy." In the 1930s, Brookings experts outlined the causes of the Great Depression that helped shape President Franklin D. Roosevelt's New Deal. Today, Brookings likes to say it is the "most quoted and most trusted think tank" in the world [sources: Brookings Institution, Troy].