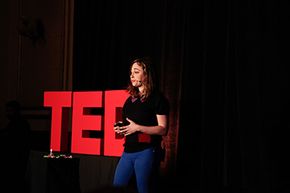 Engineer and founder of LittleBits, Ayah Bdeir, speaks during TED at SXSW at The Driskill Hotel in 2012 in Austin, Texas.
Anna Webber/WireImage/Getty Images

Have you noticed that your friends are a lot smarter lately? You go out for lunch with your best buddy from college — the same guy who skipped class to dedicate more time to his beer can stacking skills — and he starts spouting off about the secret language of dolphins. "Since when did you care about dolphins?" you ask. "Oh, I saw it on a TED talk," he says.

You get back to the office and one of your co-workers, a young woman who is usually more concerned with celebrity dating habits than astrophysics, corners you at the copy machine to tell you all about exoplanets and the possibility of life in far reaches of the galaxy. "I didn't know you were so into science," you say. "Not really," she replies. "I just watched a TED talk about it."

OK, you wonder, who is this "Ted," why is he "talking" to everyone I know about things like urban revitalization, renewable energy and virtual reality, and why is this guy making me look so dumb?

TED, it turns out, is not a person at all, but a nonprofit organization dedicated to spreading innovative ideas and exciting discoveries through 18-minute talks delivered in front of live audiences at TED conferences.

TED is an acronym for technology, entertainment and design, although TED talks cover much more ground. TED talks are not only informative, but often inspirational. TED talks have surged in popularity because they are tailor-made for the social media age. Slickly produced videos of TED talks are posted for free online, and the best talks — especially the ones with a strong personal and emotional storyline — are shared all over YouTube, Facebook and Twitter.

Some people are turned off by what they see as the "elitist" or "self-righteous" attitude of TED talks — if only the world listened to the smart people on the TED stage, there would be no more problems left to solve.

But there's a reason why the most popular TED talk has been viewed more than 34 million times (as of mid-2015). In a world of "guilty pleasures" and online time-wasters, watching or listening to a good TED talk actually feels like time well-spent. You might not really change the world, but at least you'll impress your friends.

Let's dive deep into the history of TED, how TED speakers are chosen and what kind of preparation goes into making a great TED talk.

The story of TED starts in 1984, five years before the birth of the World Wide Web. It began as a conference in Monterrey, California, organized by architect and iconoclast Richard Saul Wurman.

Wurman wanted TED to be the "ultimate dinner party" with himself as the host [source: Rose and Schuster]. Wurman chose the speakers from the best and brightest of Silicon Valley, Hollywood and academia.

Unlike today's TED conferences, in which talks are carefully scripted and rehearsed, there were no speeches. Wurman's original vision for TED was to create the "anti-conference" — no boring PowerPoint slides and one-hour lectures. At TED, groups of brilliant people took the stage and talked about the things that fascinated them. Wurman was right on stage with them, running the show. In fact, if he felt bored, Wurman had no problem sending the speaker off the stage [source: Rose and Schuster].

The very first TED conference in 1984 featured a demonstration of the compact disc, an e-book reader and a presentation by fractal mathematician Benoit Mandlebrot [source: TED]. Despite the acclaimed speakers, the inaugural conference was a financial flop.

Six years later, Wurman and his business partner tried again, and the TED Conference took off. TED talks eventually took on their 18-minute format — the limit of the human attention span, supposedly — and the invitation-only pow-wow for innovators and power players quickly became one of the most sought-after intellectual tickets of the year [source: Gallo].

Never a fan of stability, Wurman tired of running the conference and sold the rights to TED in 2001. The buyer was a nonprofit called the Sapling Foundation, run by Chris Anderson [source: TED].

Anderson brought a nonprofit sensibility to TED, while maintaining the vision of a conference that brought together world-changing ideas delivered in 18-minute chunks.

Under Anderson's stewardship, the TED audience expanded to include TEDGlobal, a series of worldwide conferences. The organization created the annual TED Prize, a $1 million grant to support the efforts of one particularly inspiring TED speaker each year. And in 2006, a year after YouTube went live, TED made the inspired decision to begin posting videos of select conference talks online [source: TED].

The rest is viral video history. TED superstar Sir Ken Robinson has racked up more than 34 million views for his 2006 talk, Do schools kill creativity? And he's only one of many TED speakers to enter the million-views club. All told, TED videos have attracted more than a billion views [source: Anderson]. 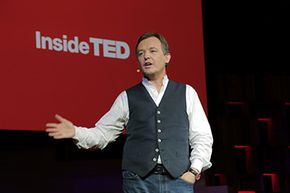 Brilliant minds are not always the best public speakers. But in the TED universe, even the world's biggest nerds are able to strut on stage and tell fiercely compelling stories about incredibly complex subjects. Where does TED find these innovative thinkers, researchers and activists who are also inspiring motivational speakers?

The short answer: It doesn't. TED curator Chris Anderson hand-picks every featured speaker at the twice-yearly TED conferences in Long Beach, California. Some of these individuals are seasoned performers, presenters and storytellers, but most of them are more comfortable in a secluded research lab or behind their laptops.

So, the polished TED talks that we watch online are the result of a months-long process of writing, editing, re-writing and rehearsing under the guidance of TED producers and coaches.

In a 2013 article for the Harvard Business Review, Anderson outlined the process for creating an unforgettable TED talk. It begins six to nine months before the conference with what Anderson calls "framing the story," which means finding a clear starting and ending point for the talk.

It can be tremendously difficult for an expert in a niche field like robotics or prison reform to give a talk that's accessible and engaging to 1,400 conference attendees, let alone a worldwide audience online. But the basics of giving a good TED talk apply to any speech you might have to give. Here are some of them [source: Anderson]:

TED speakers are encouraged to rehearse for the conference by delivering their talks at smaller gatherings before the big day arrives. With lots of preparation and help from TED staffers, even the most nervous speakers can give professional performances. One of the most popular TED talks ever was delivered live in 2012 by Susan Cain, perhaps the world's most famous introvert.

Do TED Talks Have a Real Impact?

With great popularity comes great blowback, and TED is not immune from its critics. One of the loudest cries is that TED is elitist. Not only does TED curate every speaker at its annual conferences, but it curates the audience members as well. Attendance to the two main TED conferences in Long Beach is still invitation-only. TED defends the practice as a way of diversifying the pool of attendees, including those who can't otherwise afford to attend. Plus, most of the talks eventually are made available for free to anyone with Internet access.

Another criticism of TED is that its self-congratulatory conferences and viral online videos promoting "world-changing ideas" have no real impact at all. Instead of fast-tracking truly game-changing reforms or inspiring people to go out and make a difference, the 18-minute videos provide nothing more than "megachurch infotainment" for the middlebrow masses [source: Rose and Schuster]. Anderson's response? "We're not trying to be the be-all and end-all of knowledge. What we're trying to do is make difficult knowledge accessible," he said to "60 Minutes."

While it's hard to measure the global impact of a single TED talk, there are some clear benefits for the roughly 60 people who deliver talks during each weeklong conference. TED conference presenters are not paid for their talks, and you're not allowed to use the TED platform to sell a specific product or book. But that doesn't mean that money isn't a lure for TED speakers. Twice a year, the TED conference hall in Long Beach is filled with deep-pocketed investors, philanthropists and entrepreneurs looking to fund inspiring ideas.

Bryan Stevenson, a prison reform activist, had never heard of TED before he was convinced to give a talk in 2012. After his 18 minutes on stage, which included a touching personal anecdote of an interaction with Civil Rights heroine Rosa Parks, Stevenson was approached by people who ended up donating $1 million to his cause [source: Rose and Schuster]. That's one instance where a TED talk was truly life-changing.

In addition to the main TED conferences, there are hundreds of independent TEDx gatherings held in cities worldwide. At these events, which are open to anyone, attendees watch TED talk videos and/or see in-person presenters, all as a means to sparking conversation. Then there's TEDYouth, TEDWomen, TEDActive (a live simulcast of a TED conference) and the popular TED Radio Hour podcast from NPR, which groups TED talks around a common theme. Feeling smarter yet?

What is it about someone wearing a wireless microphone that makes me want to slap it off their face? Of all the complaints levied against TED, I don't think we've given enough attention to the crime of wearing one of those clear wireless headsets that run along your jaw and make you look like you're performing at the Super Bowl half-time show instead of delivering a serious talk about the oil crisis. I have no problem with the content of TED talks. In fact, I'm a big fan of the TED Radio Hour podcast and frequently steal tidbits of information to pretend like I'm smart. But please, can we just get rid of those wireless headsets? They're almost as bad as Bluetooth earpieces for cell phones. Maybe I should write a TED talk about this! 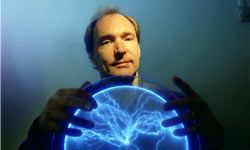 Up Next
5 Technologists Who Have Benefited Humankind
Explore More 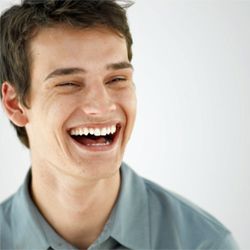 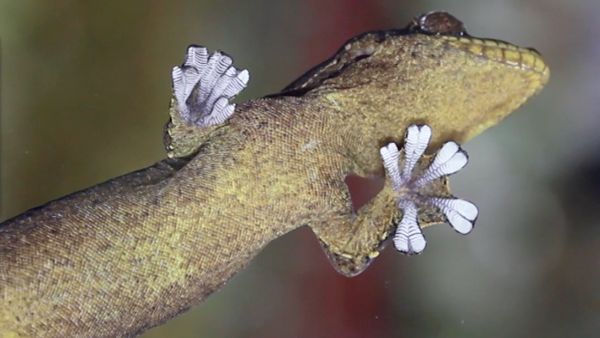