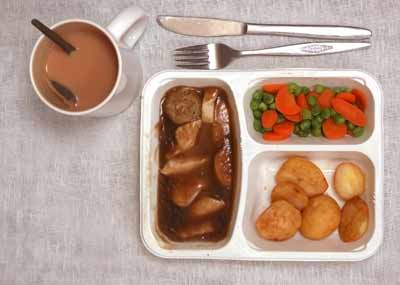 When you pass through the frozen food section in the supermarket, have you ever compared it to other sections? In many cases, pre-packaged meals which require refrigeration or freezing get an entire aisle in grocery stores, while important baking supplies such as flour or sugar only get a few feet of shelf space. Now, a frozen dinner might not be everyone's idea of a decent meal, but the concept's popularity tells us a lot about American culture. With Americans spending more time in the work place, frozen dinners are an inexpensive and convenient way to prepare food. But how and when did the idea come about?

The history of modern frozen food begins in the 1920s, when a man named Clarence Birdseye developed the process of "quick freezing", a technique in which items are frozen so fast only tiny ice crystals form. Birdseye was able to better preserve foods and maximize flavor, but the idea didn't become a commercial success until Swanson Foods came up with the concept of the "TV dinner" in 1953.

Two important factors made the TV dinner instantly popular. First, television was at the height of its golden age during the 1950s, and Swanson timed the development of the product perfectly. Families were gathering in front of their sets to watch shows such as "I Love Lucy" and "What's My Line?" on a regular basis. Swanson created a large-scale marketing campaign to associate their product as much as possible with the television. Commercials depicted families enjoying TV dinners in front of a set, and advertisers even designed the packaging to look like a television -- right down to the channel and volume knobs. The second factor was the unique feature of the segmented aluminum plate. The turkey never touched the peas, the peas never touched the potatoes, and so on. This simple convenience attracted consumers -- adults as much as children don't like their food to mix -- and the TV dinner quickly became a pop culture phenomenon.

In an effort to expand the choices available to customers, Swanson introduced frozen breakfast and lunch meals, and by the 1960s they had dropped the name "TV dinner" from the packaging. The name no longer appears on the front, but most people are aware of TV dinners through vintage television commercials and other aspects of 1950s American culture. The influence of the TV dinner is still evident today (for better or worse) -- just check out your local supermarket's frozen food section.

For more information on Swanson, TV dinners and food in general, check out links on the next page.