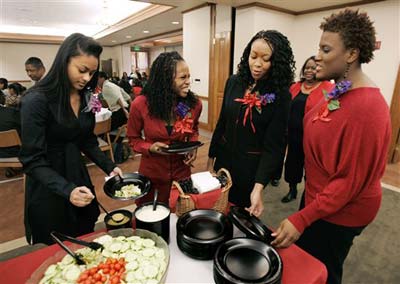 So you've made it through pledging, you've been initiated and you're finally a sorority woman. Now what?

Many sororities have a mentoring program that pairs older sisters with new members, often called a "Big Sis/Little Sis Program." Within a sorority, there may be different "family trees." For example, the big sis of your big sis would be your grand big sis. Sorority families may have their own special traditions -- like wearing a particular design of necklace with Greek letters.

Sometimes the Big Sis/Little Sis process is something like rush -- a new sister is paired with a few older sisters, and they are all matched up by preference.

Costs of being a sorority member differ depending on the campus. If the sorority has a sorority house, it may be cheaper to live in the house than in a dorm with a meal plan. A new member's dues will cost more than an older sister's out-of-house dues. It is common for large sororities at campuses with a large Greek population to cost a few thousand dollars a year. Some will cost much less. A new member may be required to buy a sorority badge and pay extra administrative costs. Optional costs include buying sorority T-shirts, sorority jewelry, pictures and paying for activities like date nights.

Wearing a sorority's letters is considered an honor. Some sororities have rules about what a sister can and cannot do while wearing her letters. For example, she might not be allowed to drink alcohol while sporting her sorority necklace. If a sorority member would like to engage in behavior not becoming of the sorority, she cannot wear her letters.

Not every sorority has a classic mansion, despite what you might see in the movies. Some sororities actually don't have houses and meet instead somewhere on campus or another facility. Sororities with houses usually have a house mom, who coordinates the day-to-day affairs of the sorority from meals to maintenance and enforces house rules, like no alcohol.

Social life is a big part of being in a sorority. Sororities often have themed socials with fraternities where sorority members get to meet and mingle with fraternity members while dressed up in costume. Sororities also organize date nights and semi-formal and formal dances (think prom for college).

Members of black sororities often call each other soror instead of sister. It has the same root word, but clearly differentiates itself from the traditional idea of a sorority woman.