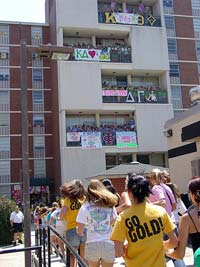 Bid day at the University of Southern
AP Photo/Steve Rouse

If you're considering going through rush, there are some sorority recruitment terms you might want to know:

Each sorority has a different private way of voting for new members. It may be an open discussion between members of the sorority or a more confidential, written process. At the end of rush, when finalizing a list of desirable potential new members, voting members will likely discuss each rushee, pointing out why she would or would not match the sorority's values and desired attributes. With a large recruitment group, sometimes a computer algorithm can help by matching sororities and their favorite rushees with rushees and their preferred houses. For a smaller group of rushees, sorority members could simply discuss the merits of the potential new members among themselves and then hold a vote on each potential new member.

At many colleges, the sororities give out formal bids on one special day, which is called bid day. At some schools, potential new members dress in a particular way (white dresses, bright T-shirts) and go to the sorority house to spend time with their new sisters-to-be.