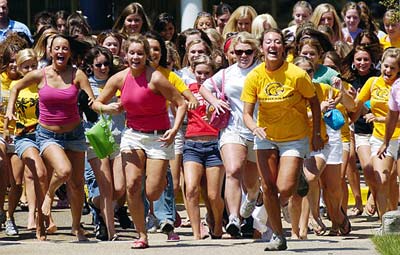 Potential new members -- commonly known as rushees -- must go through a recruitment process, traditionally known as rush. Recruitment differs depending on the college campus. At a large university with a large Greek population, like in the South at a state school, sorority recruitment may be a highly structured and dressy event, with girls teetering around in the heat wearing high heels and their mother's pearls. At a smaller university or a college with less Greek interest, sorority recruitment events are usually much less formal gatherings.

Rush usually consists of a few rounds. During these rounds, sisters meet potential new members. The women talk, perform skits, sing songs and share personal stories about what the sisterhood means to them. As rush progresses, potential new members and sororities list their choices in order of preference. Desirable rushees will receive invitations to the next round.

Ideally, rush is a time for potential new members and sisters to meet one another and see if they would be a good fit. But, the larger the Greek population and university, the more difficult that goal is. If more than one thousand girls go through rush, realistically most of the sorority members will not meet each girl. This is one instance where people get the idea that sororities can be superficial -- snap judgments may be made based purely on looks.

At some schools, a rushee has to rush all sororities -- meaning she must meet with each group at least once and attend each rush event. At other schools, a girl may choose to rush just the sororities she might like to join, based on reputation. At these schools, attending a rush party can be seen as an indication of your interest in joining that sorority.