What's really behind the 'ring test' for telling an unborn baby's sex? 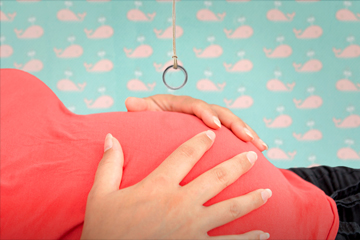 The ring prediction method is so old and enduring that it's just about impossible to unearth how it even started.
embra/MediaforMedical/ThinkStock/GettyImages

When a woman is expecting a baby, the most common question she hears is "Is it a boy or a girl?" Some people like to wait until the birth and be surprised. Others get so excited, they'll try all sorts of things to predict the sex of the baby before it's time for an ultrasound. In fact, 50 to 70 percent of expectant parents want to find out the sex of their unborn child [source: Walsh]. With dozens and dozens of old wives' tales passed down through generations of women, there's no shortage of ways to try to guess the sex of your baby. Some swear by these tests, and some just do them for fun. Let's take a closer look at one of the more popular: the ring test.

With the ring test, you take the pregnant woman's wedding ring (or other important ring) and tie it to a thread or string (some women use a strand of hair). The pregnant woman lies down, and you dangle the ring over her baby bump. If the ring swings in a circle, the baby will be a girl. If it swings back and forth, the baby is a boy. Although, as with many stories and folktales repeated over the years, some people say the opposite — a circle means a boy and back-and-forth means a girl.

We know, logically, that this isn't a scientific method of determining the sex of an unborn baby. In fact, the ring prediction method is so old and enduring that it's just about impossible to unearth how it even started. However, is there anything to these old wives' tales? Can they actually be accurate?

The Johns Hopkins School of Public Health was curious about this, too. In 1999, researchers there asked 104 pregnant women to predict the sex of their unborn babies, using whatever method they preferred — the ring test, other folklore, or dreams and hunches. The women had a 55 percent success rate, which is the same as taking a wild guess [source: Johns Hopkins]. It seems the ring test, and others like it, don't really predict anything.

Like all superstitions or folklore, though, our brains are wired to want to believe. Cornell University psychology professor Tom Gilovich says that we, as humans, look for cause and effect where there is none [source: Spencer]. For example, someone we knew used the ring test, the ring swung in a circle, and our friend had a girl. That's coincidence, though — not magic.

So why do we keep doing it? Maybe because it's fun, maybe because it's wishful thinking. A 2010 study published in the Journal of Health Psychology, however, found something interesting. Pregnant women are more likely to listen to the opinions of their friends and family than to medical advice [source: Nicolson]. Which may be why old wives' tales endure.

How Duels Work
The Law of Attraction: Will the Universe Give You What You Want?
Why do people avoid stepping on cracks?