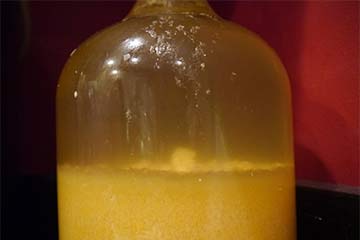 This jar of pruno (aka toilet wine) doesn't look too appetizing.
Chris/Flckr

Pruno, hooch, juice, raisin jack, brew, chalk, moonshine, buck, jump. Toilet wine is still toilet wine, by any other name. What is toilet wine, you say? Never heard of this particular varietal? It's a moniker that applies to any fermented alcohol brewed in prison and hidden in the top tank of a toilet. Some sentimental souls whip up a home batch in homage to the ol' cellblock hotel. Others -- say, those in between jobs or working through grad school -- might also find it a handy skill [source: Plumber].

While many of us just can't imagine drinking wine made within the confines of a porcelain throne, that doesn't mean others share our distaste. Many amateur vintners relish the idea of fermenting fruit into veritable viscous feasts.

If you'd like to try your hand at toilet wine, by all means, do! You'll need 10 to 12 oranges (but you can use anything sweet, like cake frosting, ketchup or jelly packets), a can of fruit cocktail, a packet of dried yeast (purists can use a discarded dinner roll or piece of bread), three cups of sugar and a 1-gallon (4-liter) plastic bag with a seal (or a trash bag, this is no time to be picky).

Peel the oranges and place them in the plastic bag with the fruit cocktail, squeeze out the air and seal the bag. Mash the fruit, but take care not to pop the bag. After the fruit is mashed, add sugar. Mix. If you're in prison, you simply run the bag under hot water. Wrap the warm bag in a towel or extra pair of prison-issue skivvies. At home, you can speed up the process by heating the bag in a double boiler on the stove for 20 to 30 minutes which will kill any bacteria and then cool it down.

After about 48 hours, carefully open the bag and add a few teaspoons of sugar and a yeast source. In prison, this may be an old dinner roll or slice of bread. At home, it could be a packet of yeast. In less than an hour, the bag will be distended with gas created by the fermentation process. Spend the next 12 hours releasing the carbon dioxide buildup and resealing the bag. Meanwhile, keep the bag in a cool, dark place (like the top tank of a toilet). Throughout the next few days, the carbon dioxide production will decrease, so you'll only need to reseal the bag periodically. In three to five days, you'll strain the fruit from the liquid, and voila! You'll now have enough toilet wine to make bad choices -- if you can get past the moldy, rotten flavor, that is [source: Darcy].

Of course, there is one other problem to consider: botulism. Turns out, prisoners and home brewers could get more than a buzz from toilet wine. The Centers for Disease Control and Prevention occasionally reports an uptick in cases of botulism associated with toilet wine. Botulism is a life-threatening toxin created by the bacterium Clostridum botulinum that causes paralysis. You're more likely to get this if you're making your wine in the clink and not able to boil your mixture at a high heat; or you can't secure fresh yeast and are making do with an old dinner roll or baked potato. Keep all this in mind if you're taking prison hooch production into your own hands [source: Lipson].

As intriguing as it sounds, I don't know that I'll whip up a batch of toilet wine at home. By all accounts, the finish lies somewhere between moldy fruit (sometimes there is actual mold floating on top) and regurgitated bile. I think I'd take a bottle of Two-Buck Chuck over that.