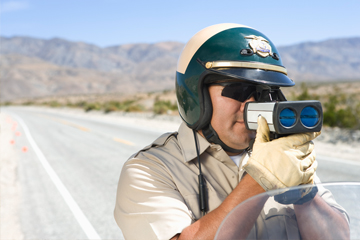 Although some police departments claim there have never been official or unofficial quotas, others admit that it is a thing that happens.
moodboard/ThinkStock

The symbiotic relationship between police operating budgets and traffic ticket revenue has long been implied, but it's very rarely spelled out. The fines attached to traffic tickets are supposed to be merely punitive, a slap-on-the-wrist punishment for driving dangerously and a deterrent to disobey traffic laws. However, fines got steeper, and cities and towns discovered they liked the money coming in, which might have made fines even steeper than before. Then cities started actually depending on ticket revenue. As in, counting on money from traffic tickets in order to make budgets balance out. And in order for that to work, police need to write a certain number of traffic tickets.

So although some police departments claim there have never, ever been official or unofficial quotas, others admit, yup, this is a thing that actually happens. In 2013, the city of Atlanta came up with a plan to tie police pay increases to ticket revenue. And if the recipient of a ticket chooses to challenge the ticket in court, and the officer who wrote the ticket doesn't show up, the ticket is dismissed. Police officers were told that they did not have to increase the number of tickets they write under this plan, but they had to spend more time hanging out in court to defend the tickets (instead of patrolling or engaging in other crime-preventing police duties). This was spelled out in an email sent from the head of the Atlanta police union to all the union's members, and it might have been the first time that such an explicit connection was made public [source: AOL Autos].

When police officers believe, or are explicitly told, that their pay and promotions depend on how many tickets are issued, the tactics can get a little problematic. Some police officers have come forward to discuss their problems with traffic ticket quotas; others have actually been investigated by their own departments for engaging in dishonest or fraudulent ticketing [source: AOL Autos]. And it's safe to deduce that countless others have gotten away with it. This includes practices such as pulling over drivers who haven't done anything wrong and trying to provoke them for an excuse to write a ticket; actually manipulating or intimidating drivers until they do something wrong; issuing duplicate tickets or sending tickets to people who are no longer alive; and outright lying. Ticket quotas vary, and quotas that have been leaked or reported on fall in the range of one per day to 100 per month. In some districts, officers that meet quotas are given prizes or bonuses, and officers that do not meet the quotas are punished with poor reviews or bad shift schedules.

The good news is that the practice of ticket quotas is under scrutiny, at least in some places. The state of Illinois banned traffic ticket quotas in 2014 and similar legislation was passed in Arizona in early 2015, although the state's governor vetoed the bill [sources: Smith, Hendley].