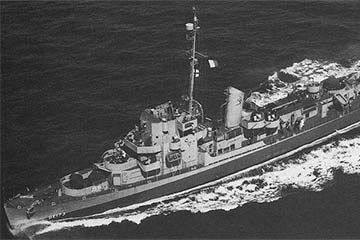 The USS Eldridge (seen in 1944) was allegedly the site of some U.S. Navy experiments in time travel.
National Archives and Records Administration

It was the summer of 1943, two years into the United States' involvement in World War II, and a bloody sea battle was raging between American destroyers and the famed U-boat submarines of the Nazis. In the Philadelphia Naval Shipyard, a newly commissioned destroyer called the USS Eldridge was being equipped with several large generators as part of a top-secret mission to win the Battle of the Atlantic once and for all.

Rumor aboard the ship was that the generators were designed to power a new kind of magnetic field that would make the warship invisible to enemy radar. With the full crew on board, it was time to test the system. In broad daylight, and in plain sight of nearby ships, the switches were thrown on the powerful generators, which hummed into action.

What happened next would baffle scientists and fuel decades of wild speculation. Witnesses describe an eerie green-blue glow surrounding the hull of the ship. Then, instantaneously and inexplicably, the Eldridge disappeared. Not just invisible to radar, but gone — vanished into thin air!

Hours later, there were reports of the Eldridge appearing in the Norfolk Naval Shipyard in Virginia, before reappearing just as suddenly back in Philadelphia. According to classified military reports, members of the Eldridge crew suffered from terrible burns and disorientation. Most shockingly, a few crewmen were found partially embedded in the steel hull of the ship; still alive, but with legs or arms sealed to the deck.

So goes the story of the Philadelphia Experiment, perhaps the most famous and widely retold example of secret government experiments with teleportation and time travel. More than 70 years later, despite the absence of any physical evidence or corroborating testimony, the Philadelphia Experiment survives as "fact" in the minds of amateur paranormalists and conspiracy theorists.

To understand how the Philadelphia Experiment really worked, we must learn about the men who first brought the closely guarded secret to light, explore the suspicious government response to their revelations and get a very different version of the story from a surviving crewmember of the Eldridge. 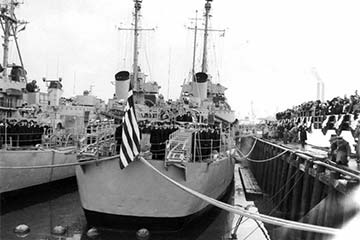 For decades, Carlos Allende (aka Carl Allen) was the sole "witness" of the allegedly supernatural events surrounding the 1943 Philadelphia Experiment. Carlos claimed to have been stationed on the SS Andrew Furuseth, a vessel docked in the Philadelphia Naval Shipyard with a clear view of the Eldridge when it disappeared.

Much later, after the release of the 1984 film "The Philadelphia Experiment," a man named Al Bielek came forward claiming to have personally taken part in the secret experiment, which he had been brainwashed to forget. Only after seeing the movie in 1988 did his repressed memories come flooding back [source: Vallee].

Despite the insistent (and constantly evolving) claims of both men, it was the testimony of a third witness that ultimately shed some light on what may have really happened in Philadelphia during that wartime summer of 1943.

In 1994, French-born astrophysicist and ufologist Jacques F. Vallee published an article in the Journal of Scientific Exploration titled "Anatomy of a Hoax: The Philadelphia Experiment Fifty Years Later." In writing a previous article about the Philadelphia Experiment, Vallee asked readers to contact him if they had further information about the alleged event. That's when Vallee received a letter from Edward Dudgeon, who served in the U.S. Navy from 1942 to 1945.

Dudgeon had served on the USS Engstrom, which was dry-docked in the Philadelphia Naval Yard during the summer of 1943 [source: Vallee]. Dudgeon was an electrician in the Navy and had full knowledge of the classified devices that were installed on both his ship and the Eldridge, which he said was there at the same time.

Far from being teleportation engines designed by Einstein (or aliens), the devices enabled the ships to scramble their magnetic signature using a technique called degaussing. The ship were wrapped in large cables and zapped with high-voltage charges. A degaussed ship wouldn't be invisible to radar, but would be undetectable by the U-boats' magnetic torpedoes.

Dudgeon was familiar with the wild rumors about disappearing ships and mangled crewmen, but credited the fabrications to loose sailor talk about "invisibility" to torpedoes and the peculiarity of the degaussing process. The "green glow" was probably due to an electric storm or St. Elmo's Fire. As for the Eldridge's mysterious appearance in Norfolk and sudden return to Philadelphia, Dudgeon explained that the Navy used inland canals — off-limits to commercial vessels — to make the trip in six hours rather than two days [source: Vallee].

In another turn of events, the Philadelphia Inquirer reported in 1999 on a reunion of sailors who served on the USS Eldridge in Atlantic City. The sailors said the ship never docked in Philadelphia. Indeed, it was in Brooklyn on its supposed date of disappearance. The ship's log confirmed this. Further, the captain said no experiments were ever conducted on the vessel.

Despite the differing accounts, both Dudgeon and the Eldridge crew confirm that nothing otherworldly happened on the ship. Yet, people continue to believe otherwise. We'll look at some reasons why the hoax has endured for more than 70 years.

The Fate of the USS Eldridge

In 1951, the U.S. transferred the ship to Greece where it was renamed the HS Leon and used in joint exercises between the two countries during the Cold War. It was eventually sold for scrap in the 1990s. A very ignoble end [source: Veronese].

Despite its near universal debunking as a hoax, the Philadelphia Experiment endures as a paranormal cultural landmark.

The 1984 movie — based loosely on Carlos Allende's original narrative — was hardly an Oscar contender, but its '80s-era special effects were good enough to plant some indelible images in the moviegoer's mind. One particularly graphic scene near the end of the film depicts a badly burned crewmember writhing on the deck of the Eldridge with half of his body swallowed up in steel.

In his article explaining the stickiness of the Philadelphia Experiment myth, Jacques F. Vallee theorizes that powerful imagery is key to the success of any long-lived hoax. Like the debunked "surgeon's photo" of the Loch Ness Monster or the doctored pictures of the Cottingley fairies, it was the clear mental images of a disappearing ship and the mangled crewmen that helped capture the public's imagination.

The plausibility of the Philadelphia Experiment story is also fortified by a general mistrust of the military and the federal government, which have admitted to carrying out unethical experiments on their own soldiers and citizens. The claims are lent further legitimacy by invoking the names of brilliant scientists like Einstein and associating the secret technology with a scientific theory that remains just out of reach.

Though the ONR said it has never conducted experiments on invisibility and that such experiments could only happen in science fiction, true believers think this is one more case of the government performing a cover-up.

Even as more evidence has emerged about the true identity of Carlos Allende — a charismatic drifter with a host of mental problems — the Philadelphia Experiment refuses to die. It has even spawned a related myth called the Montauk Project. In this version, set at an Air Force base in the 1980s, the government built on the success of the Philadelphia Experiment to "manipulate the flow of time" [source: Vallee].

For lots more information about unexplained phenomena and contagious conspiracies, check out the related HowStuffWorks articles on the next page.

You can't keep a good hoax down. The story of the Philadelphia Experiment has all of the trademark signs of a lie: a single witness, a secret government plot, pseudoscientific revelations possibly from alien sources ... It's a wonder that this thing ever caught on, let alone endured for decades. The Internet has certainly done its job. There are dozens of dubious websites dedicated to the "hidden facts" that the "government doesn't want you to know" about the Philadelphia Experiment and the Montauk Project. Anyone who dares to debunk the hoaxers is "debunked" themselves — allegedly unmasked as a CIA stooge or a paid accomplice. I can only hope that somewhere in the bowels of cyberspace, there's a brand-new article debunking me.

What's the Difference? Quiz
Why 'Wednesday' Isn't Pronounced the Way It's Spelled
The Reason Why Divorces Jump Significantly in January