Are there really people who think rules just don't apply to them? 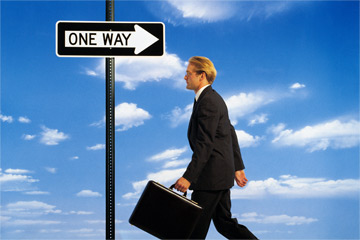 Check that business guy out. Is this a onetime, flagrant flouting of the rules, or does he regularly think he's above them?
Comstock/Thinkstock

When reading the morning paper, there are a lot of things to get indignant about. How could that politician think that he could get away with taking money from a lobbyist in exchange for a vote? How could the business executive gleefully take part in insider trading, knowing that company employees would be drained of their retirement savings? How could either of them have an affair with a dead-eyed 19-year-old club kid and think no one would find out?

It's easy enough to see why some people think the rules don't apply to them – money and power. Indeed, you probably can imagine the corrupt politician and slick-as-oil CEO getting away with both real crime and a general lack of morality. But what drives people to behavior that allows them to throw empathy out the window?

Let's remember that most humans aren't endlessly empathetic. We might be horrified by the toll of an earthquake, for example, but never contribute time – or even money – to help the victims. Does that indicate a cold, cruel nature? Does that make us ... psychopaths?

So you're not a psychopath, but what about the office manager who takes credit for work she didn't do? Or the stranger who angrily cuts a long line of people waiting to speak to a customer service representative? Are these people just having a crappy day/generally cranky, or are there truly people in the world who believe that rules don't apply to them?

We'll start with the best group of all – narcissists! – to see if those folks who love themselves a little too much might be the most at risk for caring about no one else.

Any good, dyed-in-the-wool narcissist will proudly carry that reliably inflated ego. In the preliminary drafts for the fifth edition of the Diagnostic and Statistical Manual of Mental Disorders (DSM-V), narcissists are said to display a self-grandiosity that causes a sense of entitlement. It's here where you might find your politician who thinks that having a mistress -- in plain sight -- won't come back to bite his image as a family man. (Not that the trend couldn't be reversed, but narcissistic personality disorder historically affects more men than women [source: Mayo Clinic].)

Which brings us to one John Edwards, former North Carolina senator, vice presidential nominee, onetime presidential contender and self-described narcissist. Edwards famously played on his image as a devoted husband to his wife, Elizabeth. But that didn't stop him from carrying on a not-so-hidden affair with Rielle Hunter, a documentary filmmaker. Edwards was even accused of going a step farther and really breaking the rules when he went on trial for siphoning campaign money to take care of a pregnant Hunter. (He denied the charges, and the jury was hung.) In order to hide his relationship with Hunter, a (married) Edwards' staffer took responsibility as the father of her child, even as Edwards continued his relationship with her.

And what makes a person think they can get away with such baldly unethical behavior? As Edwards himself put it to ABC News, "[My experiences] fed a self-focus, an egotism, a narcissism that leads you to believe you can do whatever you want. You're invincible. And there will be no consequences" [source: Friedman].

One interesting note is that studies have been done to show that narcissists -- while totally into themselves -- also are aware of their own narcissism, and recognize that they're often into power and exaggeration. More so, they even admit that how they are perceived by others is less flattering than how they think they are [source: Kaufman]. Which might indicate that changing narcissistic behavior is possible -- if narcissists think being more agreeable and authentic will get them what they want.

The Cult of Antisocial Personality

However you categorize it, some antisocial traits are pretty intense. People with antisocial personality disorder might display what the DSM-V refers to as "callous behavior," including a lack of guilt or remorse about their negative actions. They might manipulate people to achieve their own ends, using dishonest methods of integration or deception. They might anger at really small insults. On top of all this, they could also be disinhibited, meaning they might be impulsive or take risks without regard to consequences.

Even more disturbing is that these behaviors aren't just in adults. There's been an interest in studying children with antisocial personality disorder, especially those with strong "callous-unemotional" (CU) traits. Those traits -- the ones that basically make someone cold and calculating as opposed to impulsive and unthinking -- help construct a guideline for a psychopath. The fact that children display them is, of course, controversial -- lots of children act out behaviors that could be construed as antisocial. The difference is interesting; one study noted that nearly every psychopathic adult was antisocial as a child, while half the children with high antisocial measures didn't become psychopaths. So an antisocial child won't necessarily become a psychopath, but if you've been deemed a psychopath you're going to display antisocial behavior as a youngster [source: Kahn].

So do these psychopaths, who display antisocial behaviors at a young age, give us evidence that there are some people who just do not have the psychological -- or biological -- capacity to accept they're not above the rules? Perhaps. More tellingly, it probably shows us that if people can corral these instincts in ways we find socially acceptable (amassing power or money) as opposed to deplorable (violence), we're more than willing to celebrate breaking the rules.

Remember how we said that the preferred diagnosis in the upcoming DSM-V is "antisocial personality disorder" as opposed to psychopath? Just to complicate things, there is a separate, stand-alone psychopathy checklist developed by Dr. Robert Hare that does use certain antisocial personality traits to assess psychopathic behavior. It's called the PCL-R.

Author's Note: Are there really people who think rules just don't apply to them?

I will admit that after researching psychopathy and antisocial personality disorder, you begin to diagnose every man, woman and child with it. In my case, it was my brother's dog that -- in a rush to get outside -- launched a full-scale attack on my parents' border collie, patiently waiting for the door to open. What could cause such an outsize reaction to a little irritation? A psychopath boxer who -- I can only presume -- just didn't think the rules applied.