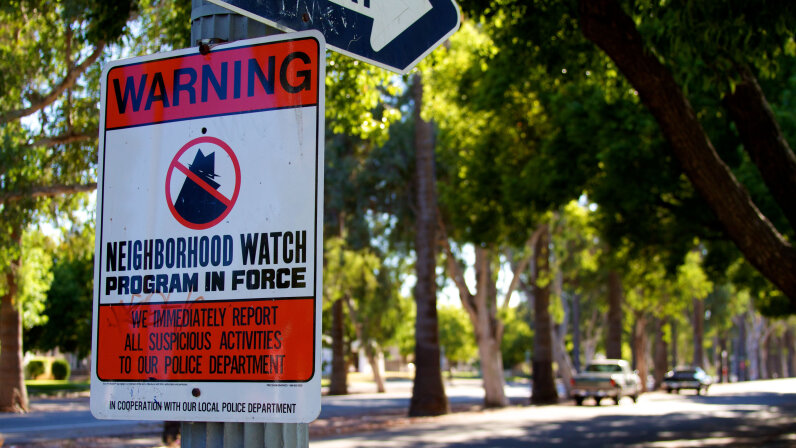 When you see a Neighborhood Watch sign, what does it actually mean? Chris Saulit/Getty Images

Boris the Burglar may not be a household name, but his face has been plastered across cities, towns and suburbs throughout the U.S. since the early 1970s. And if you've ever wandered around a neighborhood marked with orange-and-white signs bearing the image of a man dressed like a villain out of a 1950s noir film, then you've seen him too. These signs are often labeled with the words "NEIGHBORHOOD WATCH."

Although neighborhood watch programs originally started in order to respond more effectively to burglaries, the concept of neighborhood watch has evolved over time so that local residents serve as the 'eyes and ears' of law enforcement by keeping a watch out for suspicious behavior in their neighborhood and reporting potential criminal activity to police.

According to the National Neighborhood Watch's website, the concept of neighborhood watch stems from the Chicago School of social disorganization theory, which links high crime to specific neighborhoods that have weak social structures and little community control. Neighborhood watch groups theoretically step up to provide that community control. However, the concept of ordinary citizens serving as 'eyes and ears' of the police has also been criticized by advocacy groups for failing to create meaningful trust between neighbors.

The mandate of the National Neighborhood Watch shifted slightly in the aftermath of the terrorist attacks on September 11, 2001, when the NSA received a grant from the Department of Justice to rebrand the organization as USAonWatch in order for residents to share information regarding homeland security concerns. But when that grant ran out, National Neighborhood Watch returned to its roots of dealing with community-specific crime, Thompson says.

"You're walking through the neighborhood, and ... you get to a gate, and it's got a big sign that says 'beware of dog.' Are you going to go into the gate? I wouldn't," says Thompson. "So, yes, the signs are a deterrent — bottom line. If I was going to break into a house, why would I break into a house in a community where I know people are watching?"

How Are Groups Organized?

But in reality, the organization of each neighborhood watch group depends entirely on the needs and expectations of the specific community. Some groups might be focused more on community beautification efforts like removing graffiti, whereas others might be concerned with more serious concerns like drug-related violence or homelessness. Others might be concerned with organizing responses to natural disasters.

"I don't have any personal recommendations, because I don't think there is a one-size fits all [solution]. In my neighborhood, what we need to do may be totally different [than] what you do in your neighborhood," says Thompson. "So it can be from something as simple as people sharing [information] to a fully blown organization."

Although the National Neighborhood Watch organization offers training and resources, they don't have the means to provide oversight of each of the thousands of registered groups — not to mention the countless, loosely organized crime watch groups that aren't registered with the organization, which may be operating under their own informal principles. This lack of oversight has spurred concerns over the years that some residents are taking the law into their own hands through vigilante methods, instead of allowing trained law enforcement officials to handle crime situations, as the National Neighborhood Watch advises.

"Let me just say that neighborhood watch pops up all over the place. It doesn't mean they follow our guidelines and the things we tell them they should do," says Thompson. "Now, a lot of people just say, oh, we're a neighborhood watch. And they turn into a vigilante group. Well you can't control that. But that's not sanctioned by anybody. It's not recommended."

The most infamous example of such vigilantism is the case of George Zimmerman, the man who shot and killed Trayvon Martin, an unarmed black teenager, in Sanford, Florida in 2012. Zimmerman was reportedly a volunteer in a neighborhood watch group, though Thompson maintains that Zimmerman's group was not registered with the National Neighborhood Watch through the NSA.

Starting Your Own Group

"I don't think fewer people are involved [in neighborhood watch]." I think it's evolved and it's changing," says Thompson. "But people are still participating. It's just not formalized."

So what should you do if you're interested in starting your own neighborhood watch group? Thompson says the first thing you should do is head to the National Neighborhood Watch website and register your group. You'll also get access to resources to assist you in forming your own group, like this training manual. You can also locate existing groups in your area.

And neighborhood watch programs aren't just a thing in the U.S. They're in pockets across the globe, from the U.K. to Australia to the Netherlands. So wherever you live, you might find a neighborhood watch group in your own community.

Now That's Interesting
Boris the Burglar isn't the only trademarked crime prevention logo out there. McGruff the Crime Dog has been educating Americans to "Take a Bite Out Of Crime" since the 1980s.