Can I become an expert in my field using MIT OpenCourseWare?

by Jennifer Horton
NEXT PAGE 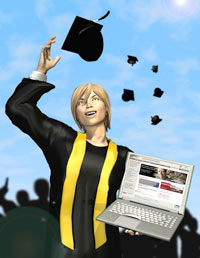 You may not earn an official MIT degree, but you might come close.
HowStuffWorks

MIT's OpenCourseWare initiative, however, may soften the blow for those crestfallen students by allowing them to access many of the school's class materials online free. The university's high standards and high tuition ($45,000, if you include room and board) have precluded many people from studying there, but MIT OpenCourseWare is less discriminating, putting boundless knowledge at the fingertips of anyone with an Internet connection.

Launched in September 2002, MIT OpenCourseWare gives people free access to practically all of the content of the 1,800 graduate and undergraduate courses from all five of MIT's schools. Class syllabi, lecture notes, problem sets, exams, reading lists and video lectures are all available. In addition, MIT has partnered with four other schools that are officially translating the materials into Spanish, Portuguese, simplified and traditional Chinese, and Thai for their own Web sites.

Since the Web site went live, more than 40 million unique visitors have stopped by, and it gets 1 million hits a month. Those users have come from more than 215 countries and territories around the world [source: MIT: Site Statistics, The OpenCourseWare Project].

If you think the majority of users are rejected MIT applicants, think again. These knowledge-hungry people break down as follows:

The MIT program has the potential to sharpen anyone's game. Find out how people around the world have used the online materials to excel in their area of expertise and learn how the Web site differs from the real thing next.