How can you tell if you're mentally ill? 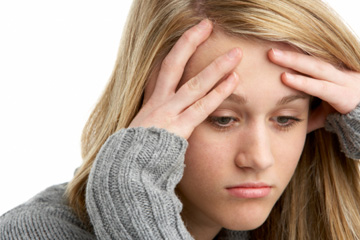 It may be hard to tell when something's really wrong. See more mental disorder pictures.
iStockphoto/Thinkstock

Mental illness is a term that comprises many different conditions, from anxiety and mood issues to addictions and psychotic disorders. We may think that these illnesses are rare, or things that simply happen to other people. We may think that they'll be easy to spot, thanks to dramatized depictions of them in film and television. We might not be willing to consider that we could have a mental disorder ourselves.

According to the National Mental Health Association, an estimated 54 million Americans suffer from some form of mental disorder every year. How can you tell if you're one of them? The signs and symptoms of many mental illnesses are spelled out in the Diagnostic and Statistical Manual of Mental Disorders (DSM), which is maintained by the American Psychiatric Association. Though the symptoms vary for each condition, here are a few common symptoms of mental illness:

Now, here's where things get a bit tricky. Everyone feels sad or anxious at one point or another. How can you tell if it's something to see a doctor about? The key to this issue -- distinguishing a bad day from excessive sadness -- is determining the extent to which your symptoms affect your ability to go about your day and maintain relationships. If the symptoms impair your life, then it's time to seek action. If you habitually avoid social outings with friends because of negative thoughts, if you can't enjoy a movie because you're too busy worrying about things out of your control or if you're always late for work because you can't get out of bed, then it's probably time to speak to a professional.

Perhaps your symptoms only affect your life sometimes. You may try to rationalize them away, saying it's just an occasional thing and that you're not as bad off as people you see on television or the movies. You may read a lot of information on the Internet and decide that you don't have an extreme case of depression or bipolar disorder, and that you can handle it on your own. It's still reasonable to speak to a doctor if you ever sense something is wrong. It only takes a mild case of mental illness to throw your entire life off-balance, and even mild cases can be treated. Mental illness doesn't have to be a condition you endure.

People may hesitate to talk to their doctors because there's such stigma attached to mental illness. Trust your gut, even if you feel that you can't trust your head. If you don't feel like yourself, bring it to your doctor's attention.