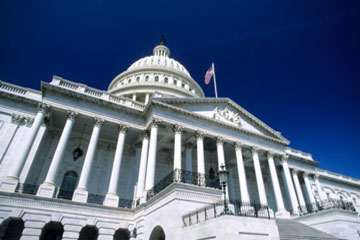 The U.S. Capitol building in Washington D.C., which has seen its share of lobbyists.
Hisham Ibrahim/Getty Images

In American politics, "lobbyist" has always been a dirty word. During the Republican primary campaign of 2012, Newt Gingrich fervently denied that his Capitol Hill consulting work qualified him as a lobbyist [source: Schlesinger]. Since 1876, Congress has required all professional lobbyists to register with the Office of the Clerk of the House of Representatives. But since most D.C. insiders will go to great lengths to avoid being branded with the scarlet "L," the government has had to impose a strict definition of who is and who isn't a lobbyist.

According to the Lobbying Disclosure Act of 1995, and amendments made by the Honest Leadership and Open Government Act of 2007, a professional lobbyist is someone who:

By that definition, there were 12,655 registered lobbyists in 2011, down from as high as 14,840 in 2007 [source: Center for Responsive Politics]. But that number leaves out folks like former Speaker of the House Gingrich, who leverages his network of political influence on behalf of clients who pay his health care consulting firm $200,000 to become "members," not clients [source: McIntire].

Gingrich is far from alone. In fact, the list of registered and unregistered lobbyists on Capitol Hill includes a large number of former elected officials and their staffers. In D.C., it's called the "revolving door" -- elected officials leaving the public service and going directly into lobbying. The New York Times counts more than 400 former legislators who have worked as lobbyists in the past decade [source: The New York Times]. Former politicians make effective lobbyists because of their personal contacts in the government and their expertise on key legislative issues.

As the legal definition suggests, lobbyists are paid by clients to meet with lawmakers and push the client's political agenda. Despite their bad reputation, lobbyists are not exclusively employed by big business. Every large organization has lobbyists roaming the halls of Capitol Hill, including Greenpeace, Catholic nuns and the Girl Scouts of America [source: Cook].

That said, not every organization has the same lobbying budget. According to the Center for Responsive Politics, the following organizations have spent the most money on lobbying efforts from 1998 to 2012:

Now that we know a little more about who lobbyists are, let's take a look at what lobbyists do all day.