How Many Cities Have a Ban on Plastic Bags? 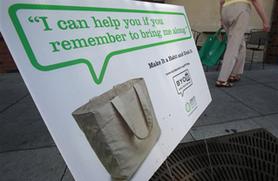 We all know how terrible plastic bags are for the environment—they choke wildlife, they don't break down in landfills (or in oceans), they add to our demand for oil, and they aren't easy to recycle, which is the biggest reason why 90 percent of plastic bags in the U.S. are not recycled.

Yet an estimated 500 billion to 1 trillion plastic bags are used worldwide every year-380 billion of those in the U.S.—and governments have been slow-moving at best to do anything about them.

According to Salon, a study a few years ago "found that the inks and colorants used on some bags contain lead, a toxin. Every year, Americans throw away some 100 billion plastic bags after they've been used to transport a prescription home from the drugstore or a quart of milk from the grocery store. It's equivalent to dumping nearly 12 million barrels of oil."

But things are finally starting to pick up. Here's a quick look at a few spots around the world that have banned plastic bags, or at least placed a tax on their use.

In California, the ban started in San Francisco in select stores; if pending legislation goes through, it could soon expand to all stores not only in the city, but in the entire state.

A similar ban exists in coastal North Carolina and was recently passed in Portland.

In 2007, Modbury became the first town to ban the plastic bag in Britain, where 13 billion plastic bags are given away every year. If customers forget to bring their own, reports the Times Online, "a range of bags made of recycled cotton with organic and fairtrade certification will be available from

Other cities have followed suit, some just a few months ago, and there are efforts to make London plastic bag-free by the time the Olympics come around in 2010. According to the Daily Mail, "Londoners use 1.6billion plastic bags a year - for an average of just 20 minutes per bag."

Mexico City adopted a ban last summer—the second major city in the western hemisphere to do so.

India seems to be taking the lead in bans on plastic bags, although enforcement is sometimes questionable. Cities including Delhi, Mumbai, Karwar, Tirumala, Vasco, Rajasthan all have a ban on the bag.

A ban went into effect (with little notice) in Rangoon late last year. In neighboring China, the use of plastic bags is restricted.

Plastic bags have been banned in Bangladesh since 2002, after being found to be responsible for the 1988 and 1998 floods that submerged most of the country.

The country, which has had a ban on plastic bags for years, has a reputation for being one of the cleanest nations not only on the continent, but in the world.

Plenty of other places have chosen not to ban plastic bags, but to discourage them through financial means. There have been taxes on plastic bags since before 2008 in Italy, Belgium, and Ireland, where plastic bag use dropped by 94 percent within weeks of the 2002 ban. In Switzerland, Germany, and Holland, the bags come with a fee.

And, in one lonely case (that I could find) of a reversal on a ban after it was implemented, Taiwan had a ban on plastic bags for three years before it lifted it in 2006.